The Osborn Award: "When January Feels Like Summer," by Cori Thomas 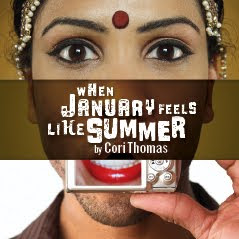 Yes, I am still catching up on awards. But I think it's good to recognize award-winners, even if you don't do it in a timely manner!

So, apologies for tardiness to Cori Thomas, who was awarded the M. Elizabeth Osborn New Play Award for her play, When January Feels Like Summer, along with the $1,000 cash prize that goes along with the award, back in April.

The M. Elizabeth Osborn Award, named after former Theatre Communications Group and American Theatre play editor M. Elizabeth Osborn, is given annually to recognize a specific play by an author whose work has not yet received "national stature," which is interpreted to mean that the playwright has not seen a significant New York production, such as Broadway or off-Broadway, has not been widely staged regionally, and has not received any major national award before this one.

Cori Thomas is a native New Yorker who lived in seven countries before returning to the United States, where she studied theater at Marymount Manhattan College. She is a lifetime member of the acting/writing ensemble at the Ensemble Studio Theatre in New York City, and she has been a finalist for a Juilliard Fellowship as well as a nominee for the Susan Smith Blackburn Prize.

When January Feels Like Summer premiered in March, 2010, at City Theatre in Pittsburgh, in a production directed by Chuck Patterson and sponsored in part by the Edgerton Foundation, which provides a fund for new American plays. (You can see the artwork for that production at the top of this blog post.) According to Thomas, the City Theatre production was her first professional production.

The American Theatre Critics Association, which funds and adjudicates the award, describes When January Feels Like Summer as "a comic and touching tale of love, sex, redemption and the survival of the American Dream in the 21st century, amid the struggle with the polar attractions of identity and assimilation. Thomas stirs together a diverse group of urban dwellers on an atypically warm winter month: a middle-aged African American sanitation worker, an East Indian shopkeeper whose husband from a loveless marriage is in a coma, her brother in the midst of a transgender transformation, and two bright homeboys trying to understand everything from global warming to meeting girls. All are on a quest for the healing power of true love, a mythic journey presided over by the Hindu god Ganesh, lord of the removal of obstacles."