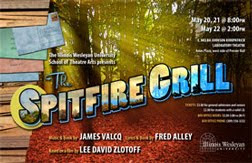 “The Spitfire Grill” has a curious history. A Roman Catholic organization trying to find a good film project with positive, inspirational themes, turned to writer-director Lee David Zlotoff, who had a Hollywood track record from shows like "MacGyver" and "Remington Steele." Zlotoff put together a script they liked, got the movie made for about $6 million, and submitted it to the Sundance Film Festival. At Sundance, this modest little movie was a real audience-pleaser, inciting a bidding war won by Castle Rock Entertainment, the production company founded by Rob Reiner among others.

But once it was released, "Spitfire" was decidedly less successful than Castle Rock anticipated, taking in only $12 million at the box office, according to the Internet Movie Database.

Still, some three years later, James Valcq and Fred Alley thought that the sweet, down-home sensibilities of “The Spitfire Grill” were exactly what they needed for a stage musical project. They changed things around a bit, moving the story from Maine to their native Wisconsin, turning surly “Nahum” into surly “Caleb” (still Biblical but less New England Yankee), trimming the storylines, building a happier ending, and, of course, adding music.

As a musical, “The Spitfire Grill” has been quite a hit, gaining critical raves Off-Broadway in 2001, and becoming “one of the most often-produced new American musicals.” Its official site notes productions “All across the United States, from Canada to the Caribbean, from Korea to Germany, from the UK to Japan.”

The story is a familiar one – there’s just something about small-town cafés that seems to resonate with writers – as it tells us about Percy Talbott, a young woman just released from prison, who shows up in Gilead, Wisconsin, after seeing a travel ad for its fall foliage. Percy is looking for a fresh start, and Joe, the lone cop in Gilead, who is also her new parole officer, steers her to the Spitfire Grill, a hardscrabble diner owned by cranky old Hannah Ferguson, as her only shot at a job.

Hannah’s nephew, the afore-mentioned Caleb, isn’t happy about this imposition on his aunt, and neither is town gossip and postmistress Effie. But Percy sticks around, trying to learn to cook and keep up with the demands of the grill. And after Hannah is injured, Caleb’s wife Shelby also comes on board, and the three women – wounded Percy, flinty Hannah and sweet Shelby – form a strong bond. In the end, Percy and her compatriots are transformed, enlightened and renewed by that bond, bringing a sense of hope back to Gilead.

Director Nicholas Reinhart, a graduating senior in the Music Theatre program at IWU, notes in the program that he wasn’t sure about the potential of “The Spitfire Grill.” “Upon first look,” Reinhart writes, “I couldn’t get past the twang of its folk score, the down-home mentality of its characters, or even its over-the-top, Hallmark card ending.” But then he realized that at its heart, “Spitfire” is about family and kinship, about building a support system with the people around you, no matter whose biology matches whose. So, yes, the script may be somewhat sentimental, with plot points and second-act revelations that you can see coming a mile off, but it also struck a chord for a graduating senior putting on his last show with his Wesleyan family.

“The Spitfire Grill” is not a big musical, and Reinhart’s staging choices make it fit nicely in IWU’s black box Laboratory Theatre, with a fairly simple but charming set, including a plain wooden floor, woodsy backdrop, one screen door, and some rolling set pieces moved by the cast members as they enter and exit, from Scenic Designer Aaron O’Neill.

Laura Williams makes a very pretty and tuneful Percy; her soaring vocals are lovely throughout, and it’s hard not to fall in love with Kate Rozycki’s warm, engaging take on her new friend Shelby.

Erika Lecaj deserves some kind of award for versatility, successfully tackling cantankerous old Hannah in this show after loopy Princess Winnifred in “Once Upon a Mattress” last fall and Eleanor Roosevelt in IWU’s “Lucky Nurse” a month ago. It’s always tough for college-age actors to play senior citizens, but Lecaj does yeoman work here, using a very different singing voice than she used for sparkling Winnifred, making it work across the board.

There’s no Musical Director credited in the program, so I am guessing that Reinhart did that, too, using a trio (keyboards, cello and violin) to play Valcq’s score, which includes country-folk tunes as well as lots of power ballads. With this show and “Big” last January under his belt, Reinhart has certainly earned his stripes along with highlighting the depth of the musical theatre program at Illinois Wesleyan.

Running time: 2:05, including one 10-minute intermission