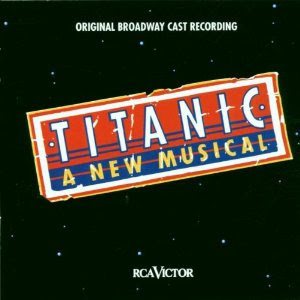 The biggest show this month (and the one where you might expect somebody to cry out, "Mayday! Mayday!") is Community Players' production of "Titanic: The Musical," the version of the Titanic story without Leonardo DiCaprio or Kate Winslet, but with haunting and lovely music and lyrics by Maury Yeston, one of my favorite musical composers. This "Titanic" won five Tony Awards in 1997, including Best Musical, Best Score for Yeston and Best Book for Peter Stone. It's an ensemble show, which meant that no one in that star-studded Broadway cast was nominated in the performance categories. For Community Players, W. John Lieder plays Captain E. J. Smith; Joel Shoemaker is Stoker Barrett; Bob McLaughlin is J. Bruce Ismay, the director of the White Star line; Mark S. Robinson is Thomas Andrews, the designer of the ship; Austin Travis is Radioman Harold Bride; Brian Artman is Steward Henry Etches; Chuck Stuckey and Deb Smith are wealthy Isidor and Ida Straus; Dave Lemmon and Reena Rhoda are passengers Edgar and Alice Beane; Nick McBurney is Charles Clarke; Kelly Slater is Caroline Neville; and Natalie LaRoque, Emily Wurmnest and Mindy LaHood play the three Kates.

Community Players' "Titanic" opens with a preview May 5, running through May 22. Click here to look at dates and times or buy tickets.

The McLean County Diversity project is presenting "The Diary of Anne Frank" at the Bloomington Center for the Performing Arts on Tuesday, May 10th and Wednesday, May 11th. Shows are at 7 pm both nights. Adults (over 25) may bring up to three high school students to the show for free.

A movie I can't wait to see, Mike Leigh's "Another Year," plays on the big screen at the Normal Theater May 12-15, with all shows at 7 pm. "Another Year" features the fabulous Jim Broadbent as half of a happy couple surrounded by sad and unhappy family, friends and colleagues over the course of one plain-old, nothing-special year. If you like Mike Leigh and his improvised, character-based films (and I do), you'll want to see this one.

Heartland Theatre gears up for its annual "New Plays from the Heartland" project with staged readings of three short one-acts on May 13 and 14. This year's winning plays, chosen from those submitted by playwrights from Illinois, Iowa, Indiana, Kentucky, Michigan, Minnesota, Missouri and Wisconsin, on the theme "I thought it would be simple," are "Buck Naked," by Gloria Bond Clunie of Evanston, Illinois, "Keeping the Words," by Normal's own Terri Ryburn, and "The Dock," by Stephen Peirick from St. Louis. More information on this new play project is available here.

Eureka College's regular theater season is done for the semester, but they will be taking on an "Unrehearsed Shakespeare Workshop" May 16-21. This year's play is "Macbeth." For details, follow this link.

Illinois Wesleyan has one last show in its season. This one is "The Spitfire Grill," with music and book by James Valcq, and lyrics and book by Fred Alley, based on the movie of the same name, written and directed by Lee David Zlotoff. Nick Reinhart directs "The Spitfire Grill" for IWU's E. Melba Kirkpatrick Laboratory Theatre, with performances on May 20th and 21st at 8 pm and May 22nd at 2 pm.

Prairie Fire Theatre returns with a Champagne Gala, a concert and fund-raiser, on May 21, at the Marriott Hotel in Uptown Normal. Your $50 ticket includes a $25 donation to Prairie Fire Theatre. Doors will open at 7 pm, and the concert will begin at 7:30 pm. Tables for the Gala can be reserved by calling 309-824-3047.

Champaign's Art Theatre has three entries in its "Performing Arts" series this month, where they show filmed versions of stage performances. On May 7 and 8, it's "The Magic Flute" from La Scala, the famous opera house in Milan, Italy, followed by "Coppelia" from the Paris Opera Ballet on May 21 and 22 and then Shakespeare's "As You Like It," from the Globe Theatre in London, on May 28 and 29. All of these "Performing Arts" shows are scheduled at noon at the Art.

And the Illinois Shakespeare Festival continues to sell tickets for its three-show summer season. I'm told last year's production of the Reduced Shakespeare Company's "Complete Works of William Shakespeare (Abridged)" was a big hit, and they're expecting this year's take to sell out quickly, as well. You are advised to get your tickets now. Get the whole scoop here.
Posted by JulieK at 11:22 AM