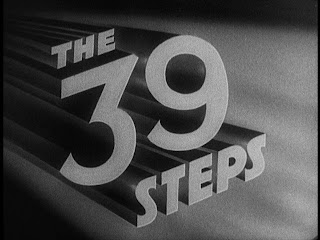 If you've seen Alfred Hitchcock's "The 39 Steps," you know there's already humor built into this familiar "man erroneously accused goes on the run to prove his innocence" story. "The 39 Steps" was early in Hitchcock's career, and he was working on getting the right tone for his somewhat snarky hero, the saucy love interest, some sexy innuendo, and all those spies and doublecrossers who have our hero in their crosshairs, all the elements that Hitchcock would get perfect in his later films like "North by Northwest." That means things in "The 39 Steps" come off a little odd at points, making it a perfect choice to really send up and make fun of.

When English comedian, actor and playwright Patrick Barlow took on "The 39 Steps" as a four-actor stage piece, he put the focus directly on the humor. Half the joke is how the two people called "clowns" in the credits can play a ton of roles, swiftly abandoning and grabbing hats and capes and accents to change identities, while the other half is about just how silly the film story was, with its opening in a music hall with the oddball Mr. Memory act, the strange notion that hero Richard Hannay would let "Miss Smith" and her scary accent come back to his flat with him with no preliminaries, the sinister Scottish farmer and his much-younger wife who seem like they should be in a totally different movie, the unpleasant girl in heels who goes tottering through the moors handcuffed to our hero; and the fact that the answer to "What is the 39 Steps?" makes no sense even when it's spelled out at the 11th hour. There's a whole lot of potential for comedy there.

Barlow's creative, crazy version of "The 39 Steps" became a big hit in London's West End in 2006, and subsequently on Broadway in 2008. Critics called it "rollicking fun" and "absurdly enjoyable."

Even this kind of "39 Steps" has to be scaled down considerably for a space the size of Urbana's Station Theatre, but it's to director Mathew Green's credit that he uses those limitations to make it even funnier and sillier. Yes, it's still "rollicking fun" and "absurdly enjoyable." And by the time leading man Rob Zaleski and "clown" Mike Prosise go romping across plain black boxes (gently flapping their jackets to indicate wind) to play out a chase across the top of train cars, you know "The 39 Steps" is in good hands. Zaleski does good work throughout as the debonair Richard Hannay, unfairly accused of murder, with Katie Baldwin going slinky, Gothic, and snappy in turn as various femmes (fatale and otherwise) in the piece, and Prosise and Mikel L Matthews Jr. absolutely hilarious with their shape-shifting antics. The hats alone are worth the price of admission, although Matthews' villainous professor and Prosise's bizarre Mr. Memory are pretty funny even without headgear.

"The 39 Steps" continues at the Station Theatre through this weekend and next, with all performances at 8 pm. For details and ticket information, click here.
Posted by JulieK at 12:33 PM