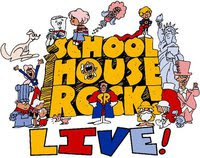 The first annual Miller Park Summer Theater Camp will present "Schoolhouse Rock Live!" this weekend and next, with shows at 7:30 pm July 29-31 and August 5-6.

"Schoolhouse Rock Live!" is a show built around the ABC Saturday morning show from the 70s and 80s (revived in the 90s), where kids could learn about grammar (who doesn't remember "Conjunction Junction"?), science, math, history and civics, with catchy songs and bright colored animation to make it all seem fun and cool.

To put on "Schoolhouse Rock Live!," the Bloomington Center for the Performing Arts teamed up with the Miller Park Theater to offer something called the Spotlight Theater Camp for children from 8-18. This theater camp has been holding workshops and classes since July 5th to show students "every aspect of the show from technical theater to choreography and voice in addition to traditional rehearsals."

Director Rhys Lovell cast actors Ryan Tipton, Terrance Watson, Ashley Genung, Shelby Voyles, Kayla Kubinski and Kathryn Langdon to tell the "Schoolhouse Rock Live!" story, involving a young teacher named Tom who is looking ahead to his first day of class with a good deal of trepidation. But then, as he watches TV to relax, helpful characters pop up all around him, reminding Tom of just how much he already knows as they sing about everything from verbs and numbers to voting rights and how a bill becomes a law.

If you saw and sang along to "Schoolhouse Rock!" when you were young, you'll want to be sure to introduce your own children to the phenomenon now. It's free, it's fun, and it's "Schoolhouse Rock Live!" at Miller Park.