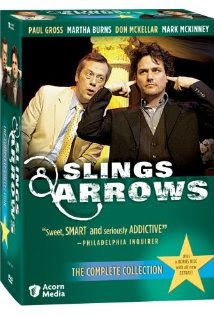 As we head into the last week of our local Shakespeare Festival, I have been having fun augmenting my experience, first with Jane Dentinger's "Winter's Tale" mystery novel and now with a Canadian TV series (three seasons, six episodes each) called "Slings and Arrows."

My friend Ron introduced me to "Slings and Arrows," which concerns the crazy backstage happenings at a fictional (and quite dysfunctional) Canadian Shakespeare festival that seems to be based on the Stratford Festival. After the first episode, I was completely smitten. The series is funny, fast and brimming over with outrageous theater people as well as inside info on how art and commerce battle it out. It benefits from terrific performances from Paul Gross (famous for "Due North" and the short-lived TV version of "The Witches of Eastwick") as Geoffrey Tennant, a talented director and actor who is dragged back to this "New Burbage Festival" even though he is madder than a hatter (and madder than Hamlet, regardless of hawks and handsaws); Gross's real-life wife Martha Burns as his former love and leading lady who is still hanging around New Burbage, now playing Gertrude instead of Ophelia; Stratford Festival regular Stephen Ouimette as Oliver Welles, the artistic director who once betrayed Geoffrey and sold out his art; and Mark McKinney, one of the Kids in the Hall, as bean-counter Richard Smith-Jones, whose secret love is "Mamma Mia" instead of "Much Ado."

"Hamlet" is the focus of the first season, as Oliver gets drunk and gets hit by a truck, Geoffrey is lured back to New Burbage to replace him and direct the same play that drove him crazy years ago AND contend with an untested and unsure Hollywood star playing Hamlet, a la Keanu Reeves, all while Oliver keeps haunting Geoffrey at every turn, not unlike Hamlet's dad in the play. Oh, and Geoffrey tries to figure out how to get Oliver's skull on-stage as Yorick. And there's a subplot involving Rachel McAdams as a New Burbage newbie; she took this "Slings and Arrows" role just before she broke out in "The Notebook."

Season Two has "Macbeth" as its main play, with Geraint Wyn Davies ('Forever Knight') as an ambitious leading actor with ego issues. There's a little "Romeo and Juliet" on the side, as directed by an avant garde doofus. (Don McKellar, part of the team behind "The Drowsy Chaperone," shows up as that doofus, Darren Nichols, every season.) Off-stage, Ellen (Martha Burns) has tax troubles and Richard (Mark McKinney) gets involved with a new marketing initiative helmed by Colm Feore as a New Age nutball named Sanjay.

And Season Three moves on to "King Lear," as a legendary actor (played by legendary Canadian actor William Hutt, who spent 39 years at Stratford) comes out of retirement to play the role, and a beautiful newcomer (played by Sarah Polley) as his Cordelia. Meanwhile, Geoffrey is acting crazier than ever, Geoffrey and Ellen struggle to make their relationship work, and Richard Smith-Jones finally gets a musical in the line-up.

I am happy to tell you that all three seasons are on DVD (as you can see by the "complete collection" box above), making them easily accessible. So far, I have shared the "Slings and Arrows" experience with quite a few friends, and they've all loved it, too.

Revisiting the episodes has made me love this series even more. Season One is the best, no question, with Paul Gross at his best as whacked-out Geoffrey, Rachel McAdams absolutely lovely as Ophelia and Luke Kirby spot-on as the wannabe Hamlet, but the other two have their joys, as well. All along the way, there's plenty of madness and outrageous fortune to spread around.

If only we could get another season. After all, there's Much Ado and Tempest and Othello and plenty of other Shakespeare with issues for Geoffrey & Co. to explore.

I just can't recommend "Slings and Arrows" highly enough. If you like Shakespeare, if you've ever hung out with crazy theater people, if you ever wondered what happens behind the scenes at summer rep... "Slings and Arrows" is for you.
Posted by JulieK at 12:38 PM