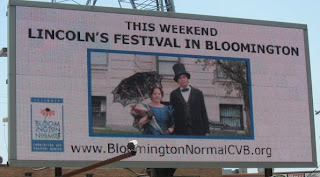 Lincoln's Bloomington Festival, this year commemorating the 150th anniversary of the beginning of the Civil War, begins tomorrow at six different sites in town.

The Bloomington Center for the Performing Arts, Bloomington Public Library, Burr House Bed & Breakfast, David Davis Mansion, IWU's Ames Library and McLean County Museum of History are all celebrating in different ways, with events planned from 10 am Saturday, July 16, (when President and Mrs. Lincoln show up in a carriage on Washington Street by the Museum) till 4 pm on Sunday, July 17.

Most events are free (and the one that's not, the Bob Bray/Jared Brown-penned play called “The Affray - Lincoln’s Last Murder Trial” at the McLean County History Museum, is sold out) and they range from bullet-making demonstrations on the lawn of the Ames Library to a Civil War fashion show at the Bloomington Public Library, scavenger hunts, movies, tea, music and dance, military drills and bugle calls, and several different events with reenactors who will present the Lincolns as well as Frederick Douglass, Jefferson Davis and Civil War generals like Robert E. Lee and Ulysses S. Grant at the McLean County History Museum and the David Davis Mansion. And all of it will be pulled together by carriage rides from the McLean County History Museum and wagon rides among and between all the sites, although you are warned that these rides are popular, so you aren't guaranteed a ride.

You are invited to dress in your own Civil War era clothing and tip your stove-pipe hat as you visit all these different events.

The complete schedule is available here with some supplementary information here.
Posted by JulieK at 8:44 AM