A Romp Through "The Complete Works," Complete with Good Ol' Boys 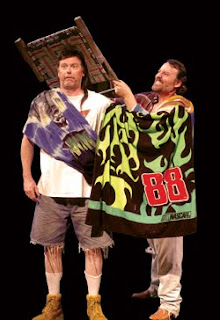 Do you find the idea of Shakespeare daunting? Well, if you’re looking for an easy entrance into the world of bodkins and fardels, look no further than the Reduced Shakespeare Company’s “The Complete Works of Shakespeare (Abridged),” wherein three performers fool around (and act foolish) for a couple of hours, romping through the entire canon in the most irreverent, accessible manner possible. Teens, dads, grandmas… Everybody gets this kind of Shakespeare.

“The Complete Works” returns to the Illinois Shakespeare Festival for the second time in four years, with most of the RSC’s script (written by Adam Long, Daniel Singer and Jess Winfield) intact, the same director in Bill Jenkins, and two of the same actors, with David Kortemeier and Thomas Anthony Quinn both back for more.

The folks behind the ISF assure us that it’s not the same show, and there are indeed updated references to Arnold Schwarzenegger and Lady Gaga, among others, and the substitution of Paula Deen for Julia Child. Plus the two good ol’ boys played by Kortemeier and Quinn (shown above) are aware that they were here before and even make this encore performance part of their shtick. And the third member of the troupe, a sort of “Complete Works” groupie played by Gerson Dacanay, is completely different. Last time the “guy who gets roped in” was supposed to be a high-strung intern. This time, he’s a diminutive super fan with a mullet of his own (at least part of the time), a sparkly hand-made T-shirt and an effervescent personality.

Still, much of the show is the same, as our three players sprint through the comedies and the history plays and then spend some quality time on “Hamlet” after the break. There’s plenty of crazy audience participation, lots of laughs, and excellent performances from all three actors. Kortemeier and Quinn have enough chemistry to feel like they really are odd stepbrothers and Dacanay seamlessly slips into their shared down-home insanity.

So, yes, I’ve seen several productions of the Reduced Shakespeare Company’s “Complete Works” (or “Compleat Works” or “The Compleat Wks of Wllm Shkspr (Abridged)” – it seems there are any number of ways to frame that title. "The Complete Works of Shakespeare" is a new one to me.) And I’ve enjoyed it every time. I’ve also found something different in it every time, and I’m not talking about whether Paula Deen or Julia Child is doing the cooking. A scene or a bit just comes alive in a different way, and there I am, along for the ride and wondering what comes next. Even though I actually know what comes next. And, hey, my section of the audience got a different line to yell at Ophelia this time. “Get thee to a nunnery!” has never been more fun.

My advice? Bear your fardels, bare your bodkin, and get tickets to this “Complete Works.” It's all in good fun.

Performed in repertory through August 7.

For tickets and other information, visit the Illinois Shakespeare Festival website here.
Posted by JulieK at 6:14 PM