Undine Down the Rabbit Hole in New Route's "Fabulation"

New Route Theatre's mission is to represent Bloomington-Normal in all its diversity, and to bring plays by "ethnically and culturally diverse playwrights" to the stage here in town. Last night's performance of Lynn Nottage's "Fabulation, or, the Re-Education of Undine" at Bloomington's Eaton Gallery fulfilled that mission nicely.

"Fabulation" revolves around a character Nottage saw around her in the African-American community, a ferociously ambitious, whip-smart woman who has achieved a lot in a short time. But to climb the ladder, Undine has completely turned her back on where and who she came from. In fact, when she graduated from Dartmouth and began her own company, she told reporters her entire family had died in a fire, torching any possible connection to her roots. It's only when her lofty financial and social worlds crumble (when her handsome con man of a husband absconds with all of her money) that Undine, who was born plain old Sharona Watkins in Brooklyn, is forced to take a hard look at herself and who she's become. 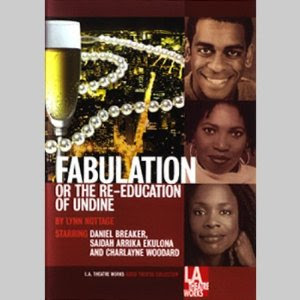 If that sounds bleak or tragic, well, in Nottage's hands, it's not. Instead, "Fabulation" depends on vivid characters and the snap of social satire to show Undine's trip down the rabbit hole. And yes, there's a certain schadenfreude at work here. Who doesn't enjoy seeing somebody puffed up and pretentious get taken down a few pegs? For Undine, it's not just getting taken down, though. It's opening her eyes and learning to be a real person.

For New Route, director Gregory D. Hicks put the emphasis on Undine's journey, moving simple set pieces -- a few chairs or a desk -- on and off quickly, using quick costume changes and light and music cues as he moved his ensemble cast through a whole lot of different characters and scenes.

Jamelle Robinson had a difficult assignment with Undine, who could've become unlikable right from the start with her snobby, high-handed ways. But Robinson showed the charm and intelligence to keep us entertained and interested in what was going to happen as Undine unraveled.

New Route's program didn't tell us who among the ensemble played what roles except for Robinson (something I hope they'll fix in productions to come) but I think I've figured it out. If I'm right, Wilma Brown did excellent work as Sharona's feisty grandma and one nasty piece of work of a Social Services supervisor; Corey L. Hardin was terrific as Sharona's dad and a Yoruba priest; Sean Hastings was sexy and slick as Undine's bounder of a husband and the almost-too-perfect new guy she meets back in Brooklyn; Ariele Jones was hilarious as the last friend Undine had left at the top and scary as a too-young mother-to-be; Anne Cook was just as scary as Stephie, Undine's assistant (it was the strange hipster outfit that did it); Charlene Ifenso-Okpala showed off her versatility as a tough cellmate and a sweet girl who used to be half of a Double Dutch duo; Miles Michael Spann was very impressive as Sharona's brother Flow, who's spent years trying to compose an epic poem about Br'er Rabbit; Claron E. Sharrieff was stalwart and sympathetic as Sharon's mom back in Brooklyn; and Ryan Tipton made a good impression as the accountant who brings bad news, a doctor who steps in at a crucial moment, and a guy who gets smacked down in group therapy.

In other words, this was a strong ensemble that did excellent work with multiple characters.

For this "One Shot Deal," every chair was taken at the Eaton Gallery, and even in last night's stifling heat, everybody paid attention.

This was my first opportunity to see one of New Route's "One Shot Deals," but it won't be my last.

The image that accompanies this blog comes from the audiobook version of the LA Theatre Works production of "Fabulation." That audiobook is available at Amazon if you'd like to have a copy to listen to and keep.
Posted by JulieK at 10:44 AM