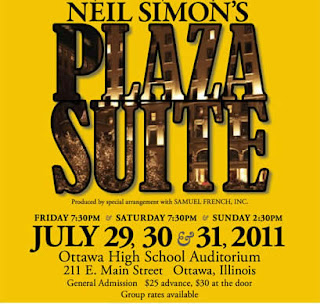 He's baaaaaack! This year, with Taylor Miller (who was the Nina half of the Cliff-and-Nina supercouple in the AMC golden days) as well as Kale Browne, who played Sam Rappaport on "One Life to Live" as well as roles on "Another World" and, of course, "All My Children." Willey, Miller and Browne will each take one piece of Neil Simon's "Plaza Suite," portraying the crazy people who check in and out of the same suite in New York's Plaza Hotel.

In the first act, Visitor From Mamaroneck, Browne will play opposite Ottawa high school teacher Mary Fennessy Morgan as a couple trying to recreate the bliss they felt on their honeymoon years ago.

Next up is Visitor from Hollywood, with Willey himself as a Hollywood producer who meets up with his old girlfriend, now a suburban housewife. The old girlfriend will be played by Minooka's Erica Quirk.

And in the last act, Visitor from Forest Hills, Miller plays the mother of a nervous bride who's locked herself in the bathroom and won't come out, with Willey's producing partner Kim "Howard" Johnson, as her husband.

Performances of "Plaza Suite" with these soap vets and local actors will take place at the Ottawa High School auditorium on July 29, 30, and 31. Tickets are available through the Ottawa Visitor’s Center at 815-434-2737 or through their website. There's more info here and here.
Posted by JulieK at 2:50 PM