Just for the record, I think Shakespeare wrote his own plays. And I really, really think it's nonsense to suggest otherwise.

But a movie called "Anonymous," from blockbuster director Roland Emmerich, opens on October 28th, and it casts the actual William Shakespeare, the glover's son from Stratford-upon-Avon, as a silly hooligan who fronted for the real writer, Edward de Vere, the Earl of Oxford. So, you know, Shakespeare was a nobody from Stratford who couldn't possibly have written these fabulous plays because he wasn't noble or aristocratic or educated enough, blah blah blah. The "Anonymous" trailer is already all over my television. And that gives me pause. Do I avoid it like the plague, because I find the very idea odious and idiotic? Or do I pay my money and "review" (and therefore spend time on) something I hope dies a quick death? 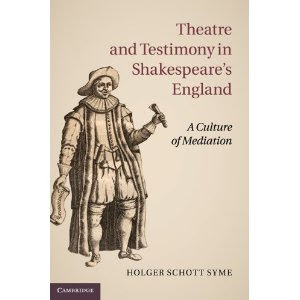 One of the blogs I follow (see column at right) has already dealt with the "Anonymous" issue far better than I ever could. Holger Schott Syme, the author of that blog, is an associate professor who teaches Shakespeare (and other topics) at the University of Toronto, where he also chairs the Department of English and Drama at the Mississauga campus. In a blog post from September 19th called "People Being Stupid About Shakespeare," Syme dissects the movie quite neatly, pointing out all the ways it is even more idiotic than you might expect from an "authorship" movie.

I will wait while you go and read that post.

Well done, yes? But Syme goes on, on October 18th, to suggest that it is not acceptable to just ignore the "Anonymous" ideas floating around out there. In "Enough Already," Syme argues that meeting Anti-Stratfordians with either boredom or rage isn't going to make them go away. He talks about Sony pictures encouraging high school teachers to use "Anonymous" in classes as a "quasi-textbook" and offers a poster of a German production of "Macbeth" that says the play was written by Edward de Vere, "alias William Shakespeare." Seriously. On the poster!

So there's my dilemma again. Should I ignore a movie that is guaranteed to set my teeth on edge? Or see it and then write about it, even though I knew I would hate it before I went?

I think I am just going to stay out of it and direct you to keep reading Holger Schott Syme.
Posted by JulieK at 11:57 AM