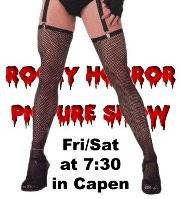 Costumes! Horror! Monsters! The Time Warp! Rocky Horror and Halloween are a match made on the planet Transsexual, in the distant galaxy of Transylvania.

Which is why the Theatre of Ted is sponsoring its 7th annual Rocky Horror Picture Show Extravaganza, a combination of live performance and the Rocky Horror film, just in time for Halloween. They did it last night, too, but I'm a day late and a few leus short. Luckily for us, there is a second Extravaganza performance.

So, tonight, Saturday, October 29th, you may experience "Rocky Horror" and all its Hot Patootie Transvestite glory, which includes a showing of the film along with a complete (fully rehearsed and choreographed) "shadow performance" of the live show performed in front of the screen. It's two shows in one! Or a hybrid. Or a Frankenshow.

Doors will open at 7 pm, with a "Virgin Ceremony" scheduled for 7:30. I have no idea what that means, but with the Theatre of Ted, it could be anything. Marking Vs on newbie's foreheads with red lipstick? Sacrificing virgins? Possibly lap dances from someone in a red corset? (I read the comments at the Facebook page linked above.) I dunno. It is an Extravaganza, after all.

Oh, and the performance begins at 8. The first 100 people get a free prop bag, which will not include the toast, rice, water pistols, open flames or other messy items sometimes associated with "Rocky Horror." Instead, if you are among the lucky 100, you will get a flashlight, some newspaper and toilet paper, playing cards, a rubber glove, a party hat, a noisemaker, and a picture of a piece of toast so you that can throw toast without actual toast crumbs falling on the carpet. The Theatre of Ted is apparently practical as well as insane, so that's good.

And all of this is only $5, payable at the door.

"The Rocky Horror Picture Show Extravaganza" takes place at Capen Auditorium, on the second floor of Edwards Hall. Edwards Hall is on the Illinois State University campus in Normal, on the East side of University Street, two buildings south of College Avenue.Parking is available in the Bone Student Center parking lot for a small charge.

Fishnets and tap shoes optional, but encouraged. Please leave the kids at home.
Posted by JulieK at 11:43 AM