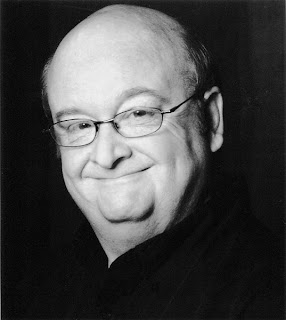 It's pretty much a given that you recognize Todd Wineburner if you've been to any theater in Bloomington-Normal, done the Discovery Walk at Evergreen Cemetery (where he is often Jesse Fell) or attended the "Funny Raiser" at Heartland Community College's Challenger Learning Center, where Mr. Wineburner has performed stand-up comedy for charity. Plus he's been on the radio hereabouts for a good long while. Currently, Todd does commercial scheduling and voice work at Radio Bloomington.

Todd is also starring in Deborah Zoe Laufer's "Sirens" at Heartland Theatre, where he plays Sam, a middle-aged songwriter who had a huge hit some 25 years ago, but has never struck gold in the same way again. Although he is married to the woman that original hit song was written about, Sam has been looking for inspiration elsewhere, trying to find old flames on Facebook and in general, trying to recapture his youth. As Todd Wineburner prepares to open in "Sirens," I chatted with him about his own past as well as about the play.

Todd, I know you’ve been working with Heartland Theatre Company for awhile. So how long has it been? And what was your first show at Heartland?

I’ve been involved at Heartland since I was in Uncle Vanya in 1995.

I know you’re from central Illinois and you’ve made a career in radio. Did you stay in Illinois for college, too? What is your academic back ground?

I have a Bachelor’s Degree from Illinois State with a double major in Theater and English. My radio background comes from my days in the Air Force when I was part of the Armed Forces Radio and Television Network at Comiso Air Station, Italy. There’s no U.S. presence at Comiso any more, but I don’t think I had anything to do with that decision.

I seem to recall you did the Shakespeare Festival here, too. Is that right?

While I was a student at ISU, I did spend one summer with the Illinois Shakespeare Festival and got the chance to play Brabantio (Desdemona’s father) in "Othello," Gremio in "The Taming of the Shrew," and Lepidus and various other characters in "Antony and Cleopatra." It was a great experience out at the old facility at Ewing Manor.

In recent years, we’ve seen you turn in excellent dramatic performances in shows like “The Drawer Boy” and top-notch comedic performances in shows like last season’s “Woman in Mind,” several ten-minute plays at Heartland, as well as stand-up and other comedy experience (and even the Discovery Walk at Evergreen Cemetery, where you played a lighter character last year). What do you prefer? What do you think is your true calling?

It’s so hard to say. I think all actors love giving a comic line and getting the instant feedback of laughter, so I guess I’ll give comedy the nod this time. Of course, sometimes the laughs don’t come, so if you ask me on those days I’d probably tell you that I prefer more serious plays. It’s all about the audience, really. When you’re doing a comedy, you want to hear a lot of noise in the form of laughter. When you’re doing something more serious, you want to hear silence as you hold the audience mesmerized. If you pick up the opposite of what you’re going for, you just try to make the best of it, but when it’s going good, it’s all good.

Although you are an old hand at Heartland, I think "Sirens" marks the first time you’ve worked with Connie de Veer. But you two are playing a couple who has been married for 25 years. How do you create that “old married” chemistry with someone you just met?

I actually attended ISU in my youth, then left for a time and returned as an older student. When I came back, Connie was the instructor for the first acting class I had at Illinois State, so even though we’ve never done a show together, we’ve known each other for quite a while. Having a familiarity with her definitely helps, but it’s working through the rehearsals that really let you mesh the two characters together to create the illusion of a long-term relationship. Luckily for me, Connie makes it pretty easy. Hopefully we can get people to believe that Sam and Rose have put some miles behind them.

I understand you have worked before with Connie’s daughter, Gwen, who plays the Siren in "Sirens." When was that? Has Gwen changed a bit since then?

When Gwen was 12, she won the title role in a production of Annie in Miller Park and I got to play Daddy Warbucks. That whole production was another great experience, and, yes, Gwen has grown a great deal as a performer since she was 12. She’s changed in other ways, too, but if I go into any of that it will sound creepy.

What would you like to tell potential audience members about "Sirens"?

The guy playing Sam is in a very delicate emotional state and if you don’t laugh at everything he says, there’s no telling what he might do. Please be kind and laugh a lot. 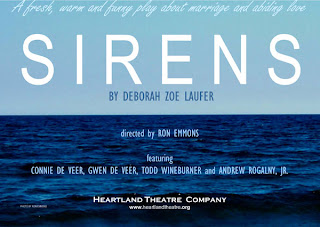 So there you have it -- a personal invitation from Todd Wineburner to come out to see "Sirens" at Heartland Theatre and a request to please laugh a lot. I don't think that's going to be a problem. He's hilarious. (And that line, about being hilarious, is even in the play.)

"Sirens" opens at Heartland this Thursday, November 3, with a special "Pay What You Can Preview" night, and runs though November 20, with performances Thursday, Friday and Saturday nights at 7:30 pm and Sunday matinees at 2 pm. For reservation information, you can click here, email boxoffice@heartlandtheatre.org or call 309-452-8709.

I'm trying to interview all four cast members as well as director Ron Emmons, so stay tuned for more pieces in upcoming days. I forgot to ask Todd if he's ever looked for old flames on Facebook, but I may add that to this blinterview* if I remember!

*Blog is a made-up, smashed-together word in the first place, so I don't feel too bad making up "blinterview." Okay, I kind of do. That is one sorry excuse for a word.
Posted by JulieK at 11:25 AM