The weather has been fabulous, which means the Discovery Walk at Evergreen Cemetery in Bloomington has been very, very popular. Candace Summers, from the McLean County Museum of History, reported that almost a thousand people took the tour last weekend and got a good look at ten citizens from Bloomington-Normal's past. 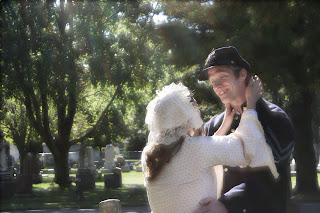 This year's characters are:

George and Frances Ela (shown at left), a young married couple separated by war but maintaining their love and their patriotism in letters. (Performed by Nick McBurney and Gwen de Veer; script written by Kathleen Kirk.)

William Horine, a private in the McLean County Regiment who sent home very colorful letters about the conditions of war. (Written and performed by Michael Pullin.)

Eliza Esque, a former slave who helped organize celebrations in honor of the Emancipation Proclamation and a reception for soldiers, including her husband, when they returned from the Civil War. (Performed by Jennifer Rusk; script written by Julie Kistler.) 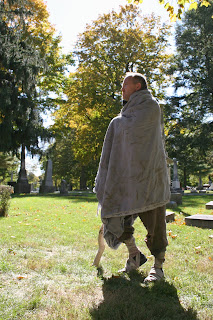 Lewis Ijams (seen at right), a Union soldier, severely wounded and assumed dead on the battlefield, who managed to make it back to Union lines and eventually home. (Played and written by Rhys Lovell.)

John McNulta, a Union colonel and commander of the McLean County Regiment who employed innovative methods to ensure the safety of the men under his command. (Played by Mickey O'Sullivan; script written by Todd Wineburner.)

Martha Rice, a Southern woman living in Bloomington. She and her husband, a Confederate sympathizer, were not looked on kindly by their neighbors. (Written and performed by Kathleen Kirk.)

Lee Smith and George Stipp, doctors who experienced the horrific conditions both surgeons and patients faced in an ill-equipped, over-crowded Union hospital housed in a former hotel on the outskirts of Washington DC. (Performed by Jeff Ready and Todd Wineburner; script written by John Kirk.) 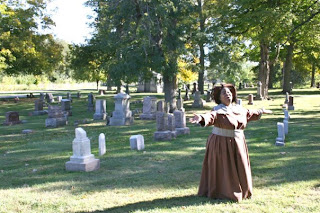 Audiences are enjoying the charming love story between the Elas, Eliza Esque (above) serenading them with a gorgeous performance of "Swing Low Sweet Chariot" as she shares her joy at emancipation, injured Lewis Ijams hanging tough and fighting for freedom in the face of adversity, Colonel McNulta's take-charge military presence, Martha Rice sweetly but tartly explaining her side of the war on the homefront, wild-eyed John Roeder trying to hang onto his marbles and the good doctors Smith and Stipp doing their best to survive the horrors of Civil War medicine.

Tours continue next weekend, with start times of 11 and 2 on Saturday and Sunday. My friend, the talented photographer Dana Colcleasure, took the photos accompanying this piece last Saturday. Fabulous images, Dana!

Click here for more information about the Discovery Walk at Evergreen Park.
Posted by JulieK at 10:44 AM