Where Are They Now? Some of the Successful Performers Who Started Here

We see a lot of acting students (and students who are in other disciplines who act on the side) come through central Illinois. And, yes, we all know what happened to John Malkovich and Terry Kinney and Jeff Perry and Jane Lynch and Gary Cole and Judith Ivey and Sean Hayes and Laurie Metcalf, all ISU students who made good. Or Mary Elizabeth Mastrantonio, who supposedly played Sarah Brown in an Illini Union Board production of "Guys and Dolls" once upon a time. But they are all before my time as a reviewer, meaning I didn't actually see any of them on stage in central Illinois.

Here are some other performers I've personally seen in shows either in Champaign-Urbana or Bloomington-Normal. No, I didn't know when I saw them that they would zoom to the top. If there's one thing I've learned in all this time watching and reviewing college theater... You just never know. 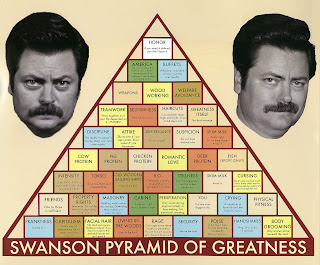 Nick Offerman, now the amazing Ron Swanson (seen above) on TV's "Parks and Recreation," didn't get cast much in U of I's mainstage shows. I do remember him as a policeman blowing a whistle in a Feydeau farce in the Colwell Playhouse at Krannert Center for the Performing Arts, as a soldier in "Biloxi Blues" at Urbana's Station Theatre, and in a bizarre piece about a burglar (Offerman) and a terrible child (played by Jimmy Slonina, now a Cirque du Soleil performer) who makes the burglar put his arm down a garbage disposal at the Armory Free Theater. I'm glad Nick survived the garbage disposal. Now he's a star!

In the same class as Nick Offerman, Joe Foust emerged as an actor to watch both at U of I and at the Station, where he had a small role in "The Mystery of Edwin Drood" and stole the show night after night. Always entertaining and eminently watchable, Foust went to Chicago with Offerman and other members of that same class to found the Defiant Theatre, named the Best Experimental Theatre in Chicago by Chicago Magazine in 1999. Foust co-wrote and directed "Action Movie: The Play," one of Defiant's biggest successes. He shared Joseph Jefferson Awards for the fight choreography in "Action Movie" and the puppetry and masks in "The Skriker." Since the much-lamented end of Defiant Theatre, Foust has performed at Chicago Shakespeare, the Goodman, Steppenwolf, Remy Bumppo, Wisdom Bridge and many other theaters, including frequent trips to Peninsula Players in Door County, where he recently did "God of Carnage." And he's played the unhappy elf in "Santaland Diaries" more than once at Chicago's Theater Wit.

Linda Gillum was another one of those U of I actors who founded the Defiant Theatre. Gillum has been an Artistic Associate at Chicago's Remy Bumppo Theatre since 2001, and she has acted in shows with A Red Orchid, Court, Defiant, Lyric Opera, Mercury, Northlight, Roadworks, ShawChicago, Steppenwolf and Theatre at the Center, and directed at Chicago Dramatists, Defiant, Famous Door, Illinois Repertory Theatre, Next Theatre, Noble Fool, St. Croix Festival, Timber Lake Playhouse, Carthage College as well as back at her alma mater, the University of Illinois. She teaches acting at Remy Bumppo, Acting Studio Chicago and the Theatre School at DePaul University.

Around the same time as Foust, Gillum and Offerman were earning their undergrad degrees, Dominic Fumusa was earning his MFA at U of I. Fumusa went from leading roles at U of I to Stephen Belber's "Tape" at the Humana Festival in Louisville and "Wait Until Dark" on Broadway, roles in everything from "Sex and the City" to "Law and Order" and "The Sopranos" and originating one of the roles in Richard Greenberg's "Take Me Out" on Broadway. Fumusa did the national tour of "Tuesdays with Morrie" opposite Harold Gould and is currently playing the hunky (if clueless) husband on HBO's "Nurse Jackie." 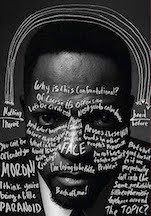 James Vincent Meredith wasn't an acting major (I think he started in pre-law at U of I) but he did play the lead in "Six Degrees of Separation" at the Station Theatre back in 1995. And he was very, very good. My friend Steve Keen directed that show, and I hope it was the success experience of "Six Degrees" that convinced James he ought to stay an actor. Meredith left Urbana for Chicago, where he did shows with Chicago Shakespeare and the Goodman, eventually joining Steppenwolf as an ensemble member. With Steppenwolf, he has played roles in "Superior Donuts," "The Bluest Eye" and "The Crucible," and is currently wowing critics in "Clybourne Park" (that's James in the "Clybourne Park" poster you see here) as well as in the STARZ series "Boss" starring Kelsey Grammer.

Another Steppenwolf ensemble member, Jon Michael Hill, went straight from U of I to the ensemble. In Urbana, I remember his performances in "A Chorus Line" and "King Lear" in the Colwell Playhouse and in "Gynt" and, oddly enough, "Six Degrees of Separation," in the Studio Theatre. Hill made a splash in "The Tempest," including a nomination for a Joseph Jefferson Award, and as the lead in the original production of "Superior Donuts" from Steppenwolf that went to Broadway, earning him a Tony nomination and a 2010 Theatre World Award. Hill followed that up by starring in ABC's "Detroit 1-8-7" last season.

The lovely Leslie Ann Sheppard memorably appeared in "The Crucible" and "Ring Around the Moon" at ISU, after which she, too, found success in Chicago, including being named one of the Chicago Tribune's "Hot New Faces" last year for her work in the musical "The Hundred Dresses" for the Chicago Children's Theatre. One of the founding members of Suitcase Shakespeare Company, Sheppard also appeared recently to offer advice to ISU theater students as part of Homecoming festivities.

It's clear that Illinois Wesleyan students have done very well in their post-college careers, especially if you can keep an eye on their Facebook page, where they detail the exploits of alums like Bryonha Marie Parham (in "Porgy and Bess" coming to Broadway in previews in December), Casey Erin Clark (in the 25th anniversary touring production of "Les Misérables"), Lisa Karlin (in "The Addams Family" on Broadway) and Evan Kasprzak, who placed third on the TV show "So You Think You Can Dance" while still a student. He is currently appearing in "Newsies" at Paper Mill Playhouse. And Sarah Bockel, who just graduated in 2010, went on as an understudy in the title role in "Violet" at Bailiwick Chicago and earned herself a rave review.

If you have other success stories I missed, send 'em on. I've been meaning to do this "Where Are They Now?" story for a long time, and I've probably misplaced some names along the way.

But, in any event, I hope this means our current ISU, IWU and U of I students will look at that BFA or MFA a little differently. In time, who knows? You just may end up with your own Pyramid of Greatness.
Posted by JulieK at 2:05 PM