"Think of All That We've Been Through..." (By Kevin Paul Wickart) 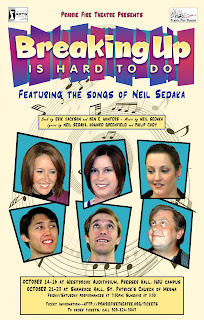 Kevin Paul Wickart is back to give us the inside scoop on his directorial debut, as he opens a Neil Sedaka jukebox show called "Breaking Up Is Hard to Do" with Prairie Fire Theatre on October 14th.

Take it away, Kevin!

How innocuous those words seemed when I first uttered them several months ago. Now, less than two weeks before opening night, they loom over me like a giant...looming thing. It is fortunate, then, that I am blessed with a cast and crew composed of experienced, talented and supremely capable people who tell me that everything is going just fine.

The show is "Breaking Up Is Hard to Do," a fairly new musical comedy featuring the music of Neil Sedaka, the guy who wrote about half the songs from the 1960s and 70s that get stuck in your head. The show features eighteen of his songs including "Where the Boys Are," "Laughter in the Rain," "Calendar Girl," "Lonely Nights," and of course the chart-topping title song. The songs highlight a script that is unashamedly, and often tongue-in-cheekedly, rooted in 1960.

Here's the plot: Young dental student Marge Gelman has just been left at the altar. Her best friend Lois talks her into going to Esther's Paradise, the supposed-to-be honeymoon resort in the Catskills, to meet boys and forget her troubles.* When Lois convinces Del Delmonaco -- the resort's up-and-coming singing star -- to romance Marge, it looks like the plan might just work. But Del has a little secret that involves his cousin Gabe, who is working the resort as a handyman. The resort's owner, Esther herself, is trying to cope with needed repairs that she can't afford to make, in spite of the questionable help of the nightly variety show's emcee and comedian, who is her late husband's best friend, Harvey. This gumbo of comic cliché is brought to the boil by the news that a producer from "American Bandstand" is coming to hear Del sing in the very last show of the season.

If you are a veteran viewer of musical theatre, you can probably figure out most of what happens. That's fine, because the plot isn't really the point. The show is designed to celebrate Sedaka's music not only by providing a framework in which to showcase it, but also by following a script that is as romantic, clever, triumphant, and just downright fun as the lyrics. Sure, it's a dramatic lightweight, but it is as full of little surprises as Neil Sedaka himself.**

What is no surprise is that the show is just plain fun to perform. The song arrangements are richly harmonious, the script brisk and delightful, and the choreography joyous and elegant.

Of course, all of this would be wasted without a cast sufficient to the task. Most are local theatre veterans, with a couple of relative newcomers to spice up the gumbo. Aimee Kerber is the emotionally vulnerable Marge, with Natalie LaRocque as her vivacious best friend, Lois. Headliner Del is played to the overbearing hilt by Nick McBurney, while the role of shy, clumsy Gabe is filled by Sean Stevens. Jennifer Lumsdon is the eternally put-upon Esther, while Your Humble Correspondent hams it up as Harvey. Each cast member is a vocal power individually, but when their voices blend it raises the music to often dizzying heights.

Supporting this cast are equally accomplished people. Michael Schneider holds the baton as Music Director and Whitney Spencer serves as Choreographer. Wardrobe and Props are handled by Opal Virtue and Sherry Bradshaw, with Lighting and Sound by Jamie Wilson. Ken Johnson designed and is building the set while his daughter Hanna, as Assistant Director and Stage Manager, organizes the whole process and keeps me from doing anything really stupid.

These people are not merely talented performers and crew. They are people with whom I have worked before, and come to respect and value their abilities. They are my friends, and without their support, dedication and professionalism I would be coming apart. But, like the song says, "Love Will Keep Us Together." And it does.

*This, boys and girls, was actually considered to be a good idea in the 1960's.

**At age 16, Sedaka published his first song and co-founded a musical group that later became The Tokens. About the only thing I accomplished at that age was being a complete dork. He is the only artist to hit the Billboard Top 10 twice with different arrangements of the same song. That song was, of course, "Breaking Up Is Hard to Do," and the feat was accomplished fourteen years apart. Sedaka isn't just about pop music. When he records songs in Italian, he does so with a flawless accent. He's also a virtuoso pianist who was slated to represent the U.S. in the 1965 Tchaikovsky Competition in Russia; his performance was canceled because of his connections to rock and roll--a form the Russians hated at the time. I consider myself lucky that I can even spell "pianno."

BREAKING UP IS HARD TO DO
Prairie Fire Theatre

For more information, go to the "Breaking Up Is Hard to Do"
Facebook Page.
Posted by JulieK at 12:35 PM