I just found out about this, so I apologize in advance for the news not being as up-to-date as it should be. But here's the scoop: Even though original director and instructor Kymberly Harris has moved part of TheatresCool to Los Angeles, the Bloomington component is still alive, with all kinds of classes currently offered by Rhys Lovell, who has worked extensively in the area as an actor, director and, yes, instructor. Lovell has offered acting classes through Heartland Theatre in the past, plus he taught a variety of courses at Illinois State and Illinois Wesleyan Universities. As an actor, he is currently rehearsing for Will Eno's Middletown, which opens April 18. 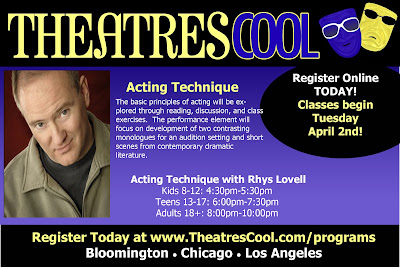 As you can see from the poster above, Rhys will teach three sections of Acting Technique classes, with sessions planned for children 8-12, teens 13-17 and adults 18 and over. The TheatresCool website gives this explanation and background on the approach to technique:

The basic principles of acting will be explored through reading, discussion, and class exercises. The performance element will focus on development of two contrasting monologues for an audition setting and short scenes from contemporary dramatic literature.

The courses are conceived with the understanding that acting begins with inspiration, with that which is innate, which is unlearned, and is subsequently given shape and made art through the practical application of technique. Both of these elements, the learned and the unlearned, are essential to the actor; to forsake either one in pursuit of the other is to be false to the craft, for neither the person who relies solely on what gifts he may possess, nor the uninspired technician, may call himself an actor.


Registration began back in February and classes are scheduled to start today, but if you're interested, you may want to email theatrescool@gmail.com to see if any spots remain. Classes are eight weeks long and are held on Tuesdays at the Bloomington Center for the Performing Arts at 600 North East Street in Bloomington.