Puppet Building Excitement This Weekend with the Illinois Shakespeare Festival

What with improv shows, Edward III, Fanny Kemble and Adopt-a-Bard-Buddy, there are lots of new things happening at this year's Illinois Shakespeare Festival. One of the coolest may be the entry of puppets into the Festival landscape, when they are used to tell the story of Philip Dawkins' Failure: A Love Story, which will fill the one non-Shakespeare slot on this year's roster. 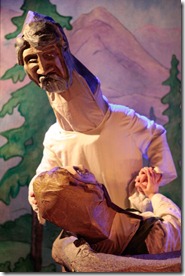 And it's not just that puppets will be on stage during Failure. You can help build them, too! Festival organizers are holding a two-day workshop with Luke Verkamp, Puppet Designer for Quest Theatre Ensemble, this weekend. One of Quest Theatre's puppet designs is shown at left, from their production of The People's Passion Play.

If you choose to join them on April 27 and 28, you can participate in the construction of "large puppets" that will be used to stage Failure: A Love Story this summer. In other words, you can "join in the excitement of making art that will be seen on-stage later this summer."

Details are sketchy on the Festival homepage, but you are invited to call the box office at 866-IL-SHAKE for details.
Posted by JulieK at 9:29 AM