As part of an array of special events coming from the Illinois Shakespeare Festival as they gear up to their summer schedule, you have a chance to see a staged reading by the Shakespeare Project of Chicago at 5 pm on Monday April 22 at the Illinois State University Center for the Performing Arts. The Shakespeare Project, including ISU alum Brynne Barnard, will perform the play Edward III,  with ISF Artistic Director Kevin Rich reading the title role of King Edward.

Tickets are $10 for the show itself, or $25 if you also want to attend the reception afterwards. They are available at the Center for the Performing Arts box office. 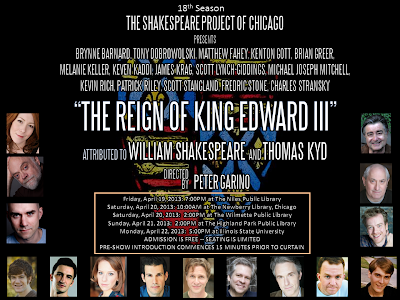 So who was Edward III and why would Shakespeare (and/or Thomas Kyd) have written a play about him?

Well, he was an English king and the son of Edward II. You may've heard of Edward II, who was fairly notorious for bestowing lavish favors on his intimate friends, like Piers Gaveston and Hugh Despenser, and then getting ousted and offed by his wife and her pal, Roger Mortimer. Edward II may've been strangled or suffocated, although the rumors were far more scandalous than that. Psst... Death by red-hot poker in an unfortunate place. That's probably not true, but it's made him far more famous all these centuries later than his son, Edward III, who is probably best-known for starting the Hundred Years War. Oh, and being king during the Black Death.

The play Edward III that may or may not have been written by Shakespeare and/or Thomas Kyd is definitely Elizabethan in origin. It involves this Edward, who was on the throne between 1327 and 1377, somewhere in the middle of his reign, when his son, Edward the Black Prince, was old enough to be a fighting man himself.

The Shakespeare Project says of the play: "Through this political history play we see Britain’s justification for the Hundred Years’ War, and follow the autocratic Edward III as he defends England against the Scottish king while moving to claim the French throne. As he seeks to possess and conquer first a woman and then a country, oaths and honor are brought into question on both sides."

Whether Shakespeare wrote any or all of Edward III, it's certainly an intriguing piece. You can judge for yourself on Monday at 5 in the ISU Center for the Performing Arts.
Posted by JulieK at 9:49 PM