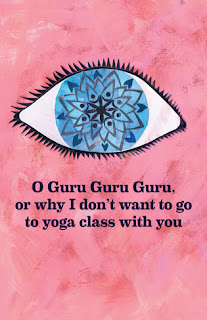 Playwright Mallery Avidon likes to stand at "the intersection of individual and collective experience," she writes in program notes for her new play O Guru Guru Guru or why I don't want to go to yoga class with you, an autobiographical (sort-of) piece that premiered at the Humana Festival of New American Plays in Louisville.

First, the individual. Like the heroine of O Guru Guru Guru, Avidon really spend some of her formative years in an ashram and now has a complicated, somewhat troubled relationship with the hierarchy. The issues in the play -- figuring out how to be an adult, finding out who you are, getting past a central unease and unhappiness you can't identify  -- are focused on Avidon's singular childhood.

Adding the collective mass media experience, Avidon was partially inspired to write O Guru Guru Guru by the popularity of the book and movie versions of Eat Pray Love, which creates a sort of capitalist/spiritual/pop culture contradiction she found intriguing, as well as a path to bring an audience into the specifics of her childhood.

That conflation of different ideas is what creates the very specific, very distinct three-scene structure of O Guru Guru Guru (with one Guru for each part of the play). In the beginning, we see Lila, Avidon's stand-in, at a lecture where she attempts to explain the ashram and its personages as well as the title question. Her aversion to going to yoga classes with pals has nothing to do with posture or breathing or stretching or lack of skill or lack of friendship, she tells us. Instead, it's rooted in what it felt like to be a child in the ashram's immersive environment, and the cracks she saw in its foundation. For others, the ashram and its all-important guru provided answers to life's questions. But for Lila, it only created more alienation, more questions, less sense of her place in the world.

Actress Rebecca Hart, who played Lila for Actors Theatre of Louisville, was our only guide to that entire first section. Hart's warmth, humor and engaging performance kept the piece alive as she navigated a slide show with no pictures and a presentation based on notecards and observations.

The tone changes considerably as we segued into the second part of the play, one where the audience is invited to come down to the floor of the playing space, take off their shoes and participate in yoga, as guided by a very serene guide in a beautiful sari, played by Daphne Gaines. The audience is asked to chant, to listen to speeches on the spiritual peace to be found in yoga's methodology, to do a little breathing, and to watch a shadow puppet play about how the god Ganesh came to be. The colorful saris and lovely young guides (Maya Lawson, Kristin Villanueva and Gisela Chipe) made it pretty to look at, if a little odd and unformed.

After that, Avidon pulls back the curtain to reveal that what we've just seen is not what we thought at all, not at an ashram at all, but a scene being shot for the movie Eat Pray Love. And our girl Lila is an extra in the movie because of her yoga skills, even though she really still hasn't found herself. Just when you think our heroine is hopelessly adrift in the modern world, here comes a deus ex machina in the form of... Julia Roberts! Actress Khrystyne Hadje, a beautiful woman who once appeared on TV's Head of the Class, stands in for Roberts, acting as Lila's final guru, a font of wisdom and advice learned in Hollywood instead of yoga class.

If nothing else, O Guru Guru Guru created a lot of discussion amongst audience members. Around me, I heard some say they were only interested in the first section, with Lila's straighforward, uncomplicated lecture, while others were drawn to the third, where Julia Roberts Ties It All Together for You, as a satisfying answer to the questions illuminated in Part I.

As usual, I'm staking out my own turf. For me, the highlight of O Guru Guru Guru was the shadow play in the second piece, which employed some of the magic of theatre -- shadows and light, puppetry, art design -- to tell its story.

What's interesting about these discussions, however, is that almost everyone felt the need to embrace one part and reject the others, as if there were a competition among those discrete Gurus. While Avidon was attempting to set up and pay off one story, she ended up with three competing parts. I also found the ultimate answer -- that Julia Roberts will invite you over to her place for Taco Night -- sweet, but unconvincing. No Guru can ultimately offer peace or answers or a place in the world. Not even Julia Roberts.
Posted by JulieK at 10:44 AM