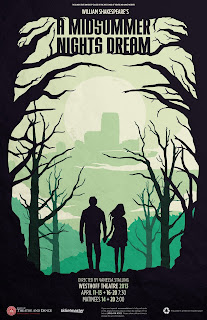 Shakespeare's A Midsummer Night's Dream has been changed up and spun around so many different ways -- trapezes and swings, puppets, steam punk, plantation, zombies, Cajun, theme park, bikers -- you might think there's nothing new that can be done to it. But director Vanessa Stalling's Midsummer takes a different tack, one completely new to me, in her Illinois State University production at Westhoff Theatre.

Stalling's Midsummer begins and ends with a young girl, a beat-up, battered little thing, who runs away from her troubles into a mysterious warehouse of the imagination. I actually guessed "attic" when I saw it, but the program notes are clear -- it's a warehouse. You get the idea fairly quickly that this Midsummer is some parts nightmare and some parts flight of imagination, as well as a coping device for our runaway child. She pulls things down from the cluttered shelves and cubbyholes looming over the playing space, as drawers magically open and close, lights appear and fade, and fantasy figures drop in and out of her dreamscape.

That means we can jump among the three overlapping stories of Oberon and Titania, the king and queen of the fairies; the quartet of Athenian lovers; and a group of Mechanicals, working men attempting to put on a play, with carefree abandon, just like they might appear during playtime for a child. And they all seem to play with an odd and slightly warped perspective.

The little girl who provides the framing device, here played with energy and spirit by Cydney Moody, steps into the action herself, taking on the role of Puck when the time comes, giving herself some of the power and control we can guess she didn't possess in real life. That extends to a sort of Superman cape near the end, protecting her, we hope, from whatever drove her here in the first place. It's to the credit of Moody's performance that we do actually worry about our little Puck when all is said and done.

Puck's vision includes fizzy, oddball songs and dances, including one to introduce our Rude Mechanicals after they pop out of the sewer where they work, another cheeky tune about a woodpecker, and an exuberant number I find impossible to describe, with the fairies frolicking in the forest and sweeping around with the lengthy train on Titania's vest, including flapping it like clean sheets on laundry day and bouncing on it like a trampoline.

There are a whole lot of inventive and creative bits of staging like that, especially when the fairies are around. That's aided by Jen Kazmierczak's nifty scenic design with all its attendant doors and hideyholes (and the surprises that keep poking out) and Caisa Sanburg's moody and atmospheric lighting design that extends the fantasy feel. Jamie Jones' costume design combines snazzy modern-dress for the court, an early 60s Dick-and-Jane look for the wayward Athenians, and some Victorian linens for the fairies, giving us the idea that Puck is mixing different sets of dolls and books in her imagination.

This is a reduced version of the play, with, for example, only four Mechanicals instead of the usual six, with Robin Starveling and Tom Snout right out, and some changes to the script to get it to come in, complete with new opening scene, at just about two hours. Stalling also uses the same actors -- Devon Nimerfroh and Abby Vombrack -- to play both Oberon and Titania and the Duke and his bride, Titania, which is not an unusual move. It underlines the tie between the two battling sets of lovers and in this subconscious world, gives Puck a way to work out that battle in Fairyland. Nimerfroh and Vombrack are strong in both pairings, but I especially enjoyed Nimerfroh's warmth as the sentimental-at-heart Oberon and Vombrack's tempestuous yet bright-eyed take on Titania. Her Titania reminded me a bit of Madeline Kahn's Bride of Frankenstein; let it be noted that conjuring up Kahn is a huge compliment to any actress.

Alex Strzelecki makes Bottom the weaver pretty darn cute (even if he is a smudged-up sewer rat) and not such a come-down for Titania, which is a welcome development, while the mismatched lovers are energetic and fun as a unit and Fiona Stephens' engaging Helena stands out among them. I also enjoyed the coterie of fairies, a sunny bunch of free spirits, with Mary DeWitt and Omar Shammaa coming off especially charming.

In the end, Stalling's Midsummer is bright and boisterous, as well as affecting. It's something people do and have always done, telling ourselves stories to take us out of life's dark and scary corners. But I'm still worried about Little Miss Puck. At the end of the play, we can only hope she's okay in the hard, cold world outside her imagination.

For ticket information, click here.
Posted by JulieK at 3:16 PM