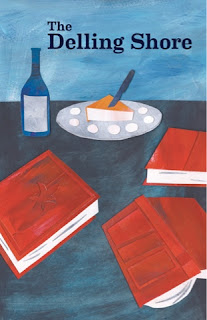 Playwrights love to write plays about writers. Writing is a tough world to try to make a living, with most writers spending a whole lot of time scrambling to be successful enough to consider writing a career instead of a sideline,  so it's only natural that playwrights and screenwriters and novelists would all be attracted to the conflicts, dashed hopes and complete injustice of the world of books. Plus, of course, if you write about people who write, you get to use all your best words.

Conflict, dashes hopes, injustice -- along with lots of books and lots of words -- are on display in Sam Marks' The Delling Shore, the first play I saw yesterday at Actors Theatre of Louisville's Humana Festival of New American Plays. Marks' central notion is familiar to anyone who's written books over a period of time, where you band together with friends and colleagues at the beginning, everyone supporting each other as you line up at the start. But when the race begins, it often happens that one friend pulls away, lapping everybody else. It may be that this writer is just really superior, really talented. It may be that he or she worked hard to make connections, find a path, blaze ahead. Or it may be that it makes no sense at all, that it was a random and crazy occurrence in a random and crazy career.

The two writers at the center of The Delling Shore grapple with that complex question of success in the writing biz. Grad students together 25 years ago, Frank and Thomas thought they were both good writers. But Thomas has become a superstar, a guy with awards and money and movie rights, while Frank is still struggling, editing a third-rate journal just to scrape by. With a new book in hand and a daughter who is desperate for an internship with Thomas -- she wants to learn from the master, a sentiment not lost on her dad, who realizes he is not that master, not even to his own daughter -- Frank arrives at Thomas's lovely summer home, a place as scenic as it is remote.

There are tensions right from the get-go. Frank (Bruce McKenzie) and his daughter Adrianne (Catherine Combs) are hours late. Thomas (Jim Frangione) and his daughter Ellen (Meredith Forlenza) are peeved at the tardy arrival, unconcerned that their guests are hungry or that they were unable to get through on cell phones to get directions or warn of the delay. Things only get worse from there. Frank's jealousy of his old friend's fame and fortune overshadows everything, but Thomas isn't exactly gracious about their supposed friendship, either. And neither man is on great terms with his own daughter.

I enjoyed the bookishness of The Delling Shore and I suspect other writers will, too. I may've lived in the world of romance writers (who get a pot shot in the script. Of course.) rather than literary writers, but the bruised and inflated egos, desperation for a chance, and complete identification with one's literary product are familiar to me. It's a writer-eat-writer world, no matter where you're at in that world.

And I would love to incorporate the Book Game into an evening's entertainments. As far as I know, that game, much discussed and threatened before they actually get to it, was invented for The Delling Shore. If it is original, it's a good idea, not too difficult, designed to make literary folks feel smart. But it is also in no way a sufficient pay-off for all the ominous discussion that precedes it. Let's just say the build-up feels like we're headed toward "Humiliate the Host" or "Get the Guests" from Who's Afraid of Virginia Woolf, and instead it's Fictionary. That's just not good enough to get us to buy into or get behind these characters and their squabbles. Yes, they're familiar as neurotic writers. But there's just not enough at stake here. We know from the start and Thomas's general behavior that he is not going to do anybody any favors, and from the chip on Frank's shoulder that he's not going to emerge a victor. Thomas is such a jerk that it seems much better for Adrienne if she does not get the internship. Only Ellen, the spoiled, pretty daughter with the six-figure income from a job in banking -- the one character outside the writers' circle -- has the energy and spark to seem like a real human being.

I could definitely be into an examination of the power dynamics and destructive nature of The Writing Life. There are also intriguing hints here of the effects of privilege and money on one's talent and character. In the end, however, those hints don't really pay off. Kind of like the Book Game.

THE DELLING SHORE
by Sam Marks

For information on Actors Theatre of Louisville and the Humana Festival of New American plays, click here.
Posted by JulieK at 9:29 AM