Who's Got the Bitch of Living in ISU's SPRING AWAKENING

The musical Spring Awakening, the first show on Illinois State University's fall schedule, has been cast. Spring Awakening is a gritty, grim, yet intensely alive sort of musical, with Duncan Sheik's pulsing alt-rock music fueling the teen angst in Steven Sater's book and lyrics. Together, they tell the story of just how dangerous it is to keep kids in the dark about their own bodies and sexual urges. Spring Awakening the musical is based on an 1891 play by German playwright Frank Wedekind, and that play was performed at ISU as part of the 2007-08 season under the title Spring's Awakening.

This time out, director Matthew Scott Campbell will be working with Colin Lawrence and Gloria Petrelli as Melchior and Wendla, the confused pair of teenagers trying to navigate a sexually repressive society, and Carlos Kmet as Moritz, Melchior's best friend, who is withering under the pressures of puberty and adolescence.

Those roles were filled by Jonathan Groff, Lea Michele and John Gallagher, Jr., in the original Broadway production that won eight Tony Awards, including Best Musical, Best Featured Actor (for Gallagher), Best Book, Best Score, Best Direction, Best Orchestrations, Best Choreography and Best Lighting Design. The show's steam-punk-meets-rock-and-roll spirit made it a sensation, putting Groff, Michele and Gallagher on the road to stardom. You can get a hint of that rebellious look and energy in the photo below from the Broadway production. Duncan Sheik's unrelenting beat and Sater's twisted, profane lyrics, showcased in knickers, skinny ties, strange hairdos and black socks against a bare-bones set, gave Wedekind's old story a real kick. 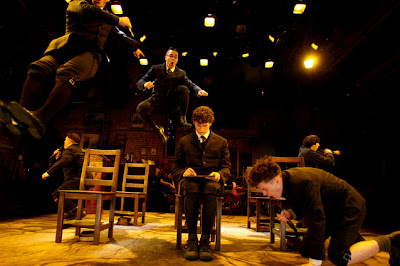 Click here for ticket information. Tickets for Spring Awakening are already available at Ticketmaster, and you will be able to get info and tickets for all the fall shows through the CPA box office after August 26.
Posted by JulieK at 3:24 PM