With The Exonerated just concluded and Mrs. Packard running right now in the Center for the Performing Arts at Illinois State University, ISU's Department of Theatre and Dance has been very busy. Next up: Pericles, the roving Shakespearean (or maybe Shakespearean -- more about that later) adventure play about a man named Pericles who finds himself up and down, lost and found, as he travels through a wild world of possibilities and drama. Second-year MFA directing candidate David Ian Lee is navigating the stormy seas of this Pericles, and I posed a few questions to Lee to see what I could expect from his version of this journey. 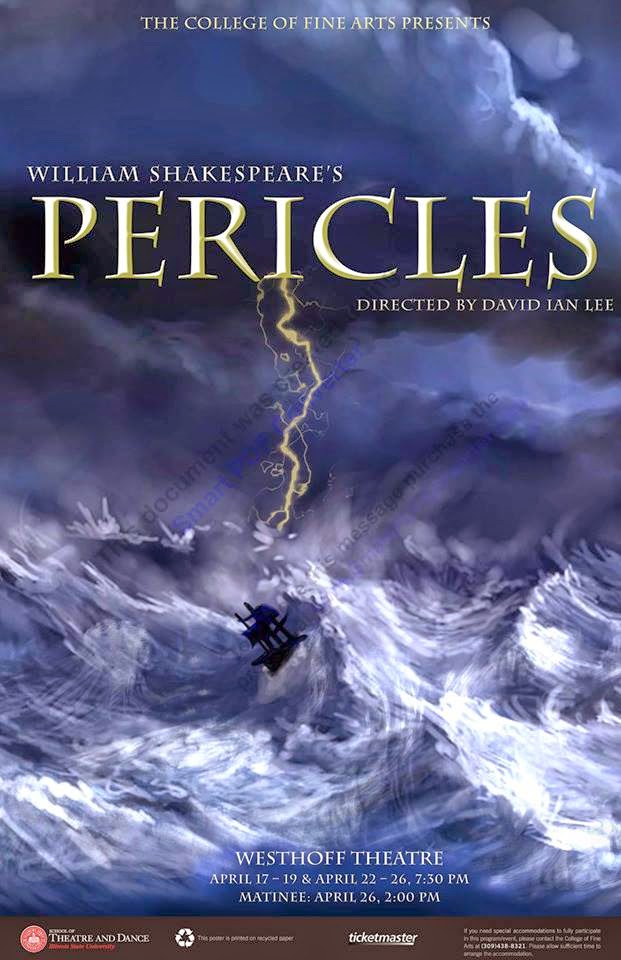 As a director, what attracts you to material like Pericles? At its heart, what do you think this play is about?

Pericles tells the story of a charming, roguish prince who sails from kingdom to kingdom, pursuing adventure and wooing princesses. He’s a bit of a narcissistic twit, who along the way is humbled, falls in love, and becomes a father. And that’s when Fortune chooses to take from Pericles all that he holds dear. This is a story about growing up. It’s about dads and their kids, and that’s what makes it personal for me. Our play is about how children may redeem their parents, and about the responsibility each of us bears for one another. But, also: There are pirates and prostitutes and shipwrecks and swordfights! There’s birth, death, and a couple of rebirths. There’s magic. This is a story set "once upon a time," with all the fun and adventure of an Indiana Jones movie.

Pericles is not among the most familiar or most frequently performed of Shakespeare plays. There are also different theories about how much of the play, if any of it, Shakespeare wrote. Does any of that make a difference in how you approach directing it?

Scholarship suggests that Shakespeare collaborated with the English dramatist George Wilkins on Pericles; we joke in the room that Shakespeare wrote the middle acts, and that Wilkins worked on the (trickier, more erratic) first and final acts. The truth, of course, is that what we recognize as “Shakespeare’s plays” come to us by way of four-hundred years of editing and revision. But we’ve approached the piece the same way we would any other play: How do we best tell this story?

As written, Pericles is set in ancient times in lands and seas around Greece and Phoenicia, but It's interesting that the modern versions of the places Pericles visits would be in Turkey, Libya and Lebanon. How does the setting inform your production? What are you doing with the period of the play?

There seem to be two prevailing aesthetic preferences when staging Shakespeare today: "In the period" -- which loosely translates as "about 1600ish" – or in a place or time that creates a metaphoric framework for the show, and that’s how we get post-apocalyptic King Lears or Romeo & Juliets set during the American Civil War. We went in a different direction. Our design team created the six different cultures of the play "from the ground up," imagining a fantastical realm of antiquity. Shakespeare traded in cultural appropriation, to be sure, so we didn't concern ourselves with "What would an Antiochian or a Pentapolean look like?" but rather "How would an Elizabethan audience member have received these various exotic cultures, and how do we create worlds that achieve the same effects?" It’s an exciting experiment, and the results are evocative and unique!

This will be your second show in a row (after last semester's Angels in America: Perestroika, performed in ISU's Centennial West 207) where you will be working with the journey and scope of a huge, epic play. This time you have a bit more space in Westhoff, but what do you do as a director to bring alive the scope of an epic play in a small space?

This play brings a whole heap of challenges: Swordfights, dances, songs, music, dumbshows, sailing sequences, mystical sequences… There’s a lot of stuff in Pericles! What’s wonderful about the play as a celebration of theatre is that all the spectacle is in the service of telling the story of a human being. I think that connects Angels and Pericles; both tell big stories that play across epic landscapes, but the plays focus on people in locked combat with forces seemingly greater than they. That’s something I’m drawn to: We are such fragile, imperfect things, but we are capable of grace and greatness.

Finally, what would you like audiences to know before they come to see your PERICLES? What should they expect?

I love Shakespeare in performance because of the opportunities for audience utilization and interaction. I once took a master class with John Barton, who described the experience of playing Shakespeare as being alone with three hundred of your closest friends. We’ve no "fourth wall" in our production, so we’ll talk to you, but we may also touch or climb on you. Pericles makes for a fun ride!

Pericles will be in performance at Westhoff Theatre from April 17 to 26. For information, click here or here.
Posted by JulieK at 1:00 PM