Hnath's CHRISTIANS Shows the Theatrical Side of Faith 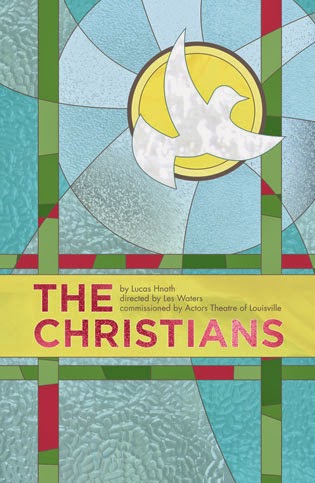 From the moment the stage was revealed for Lucas Hnath's The Christians, a Humana Festival play set in Actors Theatre of Louisville's Pamela Brown Auditorium, it was obvious we were going to church.

Instead of a theatrical stage, this was an evangelical one, with pretty blue carpet rising in tiers, a choir at the back, a pulpit, a couple of screens showing off images of doves and blue skies, and a few posh chairs facing us, flanked by microphones. It was quite clearly the chancel of a prosperous mega-church. All it needed were the worship leaders. And in they marched.

One of them, Pastor Paul, took the mic, starting a sermon. That began the particular convention of this play, that we would hear almost everything -- dialogue, monologues, inner thoughts, even a dialogue tag or two -- through microphones. I can recall exactly two lines where a character dropped the mic. One involved a parishioner expressing distrust, and the other occurred when a rival preacher demonstrated his own vocal strength didn't require amplification.

But all that dialogue delivered from the altar plus the microphones translated to one thing: church as theatre. Pastor Paul is used to using his voice and his calm, comforting persona to bring in new parishioners and keep the old ones happy. Pastor Paul is playing a role.

As his church has grown, the pastor has done his best to keep the coffers full. But now, with their building fund debt paid off, he feels free to discuss a crisis of conscious. He doesn't believe in hell anymore. That's a huge deal for this particular church and a huge betrayal for some of his parishioners. Those debates, those faith-based conflicts, are played out in the same way, as if they were announced right there in church, in front of God and everybody.

To Hnath's credit, he doesn't stack the deck. Each side gets its due and its arguments on the central issue. How do caring people who believe that Jesus is the one path to Heaven deal with the innocents in other cultures and other faiths who are then consigned to the fires of Hell as non-believers?

If this is an issue that has never occurred to you before, The Christians may be an eye-opener, an impassioned debate, a revelation as to what happens to one man when a crack appears in the foundation of his life built on faith. His ambitious assistant pastor is the first to go. Members of the congregation follow. The church's leadership is wavering. And the pastor's wife, a woman of faith, is beginning to wonder where her greatest loyalty lies.

Faith vs. love. Faith vs. ambition. Faith vs. humanity. As the pastor grapples with what he believes and why he believes it, as well as just how much he's willing to lose in the name of his newly found religious convictions, The Christians becomes more than an academic exercise. As the pastor in the center of The Christians, Andrew Garman is very strong and smooth, and his conversations with his wife, played by Linda Powell, who is silent for a good, long time, are some of the most affecting in the play.

The idea of casting religion in theatrical garb certainly makes it point about the artifice, the decorations and finery that decorate and amplify churches to make them palatable to the public, and the various conflicts are well articulated. Still, the way this play is staged -- with people either just sitting or standing around the altar and talking mostly to us instead of each other -- tends to create the very distance Pastor Paul says he feels.

In the end, The Christians sets up some impossible but compelling questions, but few answers. But isn't that the way of faith?
Posted by JulieK at 1:00 PM