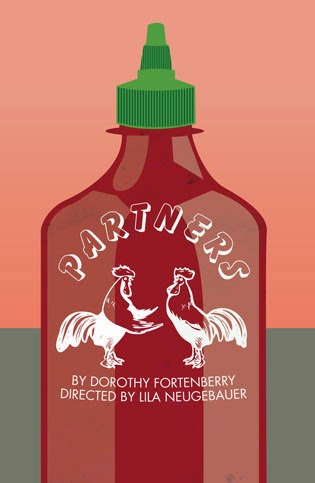 The word partners carries a lot of weight if you think about it. We call romantically involved people partners, gay, straight, married or otherwise. We call people who put a business together or dance together or play cards together or write a book together or take their act on the road together partners. But what does that mean in terms of the basic qualities -- loyalty, honesty, trust, support -- we expect from a true partner?

Those are some of the things Dorothy Fortenberry investigates in her play Partners, one of this year's selections at the Humana Festival of New American Plays. Fortenberry is mostly interested in domestic partners -- one married straight couple, one unmarried gay couple -- and how their choices at home echo through another partnership, a longtime friendship between the straight wife and one of the gay men.

Clare, who went to culinary school and has a real talent for things like fig foam and teeny tiny pork belly bits on a cracker, has been besties with Ezra for absolute ever. Ezra has a plan to launch a food truck based on Clare's recipes and his entrepreneurial ideas. But Clare has been missing meetings, dragging her feet on the video Ezra needs to sell their idea to potential backers, and in general, letting Ezra down.

Clare is much more eager to talk about Ezra marrying his boyfriend Brady than she is to talk about the food truck. She also seems much more invested in their relationship than her own with her husband, Paul, an IT guy for a law firm who we're told doesn't pull in much money. Clare's own job arranging food for photos is also not lucrative, meaning she and Paul are not exactly living high on the pork belly.

Over in the other household, Ezra temps here and there and Brady teaches at a school with disadvantaged children, a job that's is more rewarding than remunerative, even though his wealthy parents do help out now and again.

All of this sets up the first of Fortenberry's major focuses, which is money and how we share it with our partners. Who pays for whom? Who owes whom? Paul's modest salary keeps his life with Clare afloat, but when Clare gets a financial windfall, she isn't all that into sharing the news or the money with Paul. Ezra wants Clare and Paul to kick in some cash for the food truck or at least lend him a credit card. Brady's parents don't want to subsidize Ezra. And Ezra doesn't want to marry Brady just to get the health insurance he otherwise can't afford.

The other elephant in the room is sex. Or lack of it. Clare is fascinated by what she imagines of Ezra and Brady's hot life, while we find out late in the play that her romantic life with her husband leaves a lot to be desired. Meanwhile, back in Brady-and-Ezra-ville, when marriage is put on the table, issues of monogamy and fidelity serve as a major obstacles toward wedded bliss.

And then there's the bigger issue: When it comes to sex, money and how we support a partner financially and emotionally, how do we know and articulate what we really want?

There are some interesting ideas floating around in Partners and all three relationships (Clare/Paul, Ezra/Brady and Clare/Ezra) have their moments of clarity and conflict in director Lila Neugebauer's Actors Theatre of Louisville production. But I found myself wishing Clare had been written with the sparks of charm and reason the male characters get. We see and hear about her acne, the medical woes in her past, her lies of omission and some serious self-sabotage. No matter how many times Ezra tells us that Clare is too adorable to be mad at, she comes off miserable, dishonest, and a little whiny instead. I wanted Ezra and Paul to hold her accountable for her passive aggressive ways and unwillingness to step up and tell the truth. Neugebauer is working with an actress, Annie Purcell, who really is kind of adorable, but the way Fortenberry's script treats Clare undermines the actress's personal charm.

In contrast, the Ezra we see is a lot of fun, if sometimes maddeningly unable to read people, and Kasey Mahaffy navigates the tricky bits nicely, especially as the conflict in his relationships escalates. The two partners -- Clare's husband Paul and Ezra's boyfriend Brady -- come off quite well throughout, with a strong performance from David Ross that makes Paul seem forthright and complicated in all the rights ways and good work from LeRoy McClain that gives some heft to Brady's life and opinions.

In the end, Partners looked beautiful, with a sleek set from Daniel Zimmerman that framed the action on the ground and in the air, but seemed a bit unformed or overstuffed as it played out. Why did these two marry each other? Why did these two move in and hook their lives together? And why in the world did these two stay friends so long?

Those are not questions Partners deals with. They're just the ones that nagged at me.
Posted by JulieK at 2:56 PM