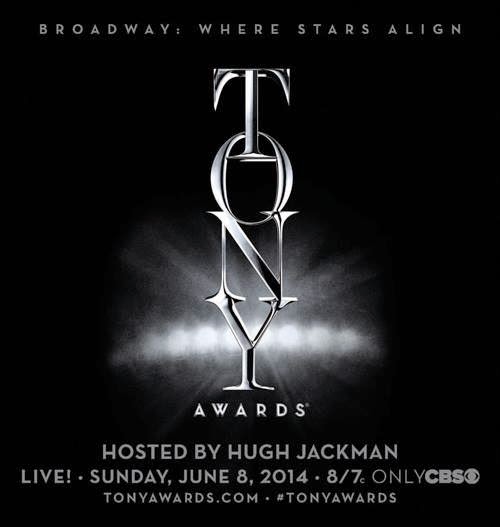 Today was Tony nominations day, when multi-media performers Jonathan Groff (Frozen, Looking, Spring Awakening) and Lucy Liu (Charlie's Angels, Elementary, God of Carnage) took the podium at the Paramount Hotel in New York City to announce who among Broadway performers and which among Broadway shows Tony voters wanted to honor.

But first... Hugh Jackman crashed the announcement to offer a reminder that the Tony Awards themselves will take place on Sunday, June 8 at 8 pm Eastern time. Don't forget!

Back to the nominees. A Gentleman's Guide to Love & Murder, a musical version of the Alec Guiness movie Kind Hearts and Coronets, landed at the top of the nominations heap with ten overall, with Neil Patrick Harris and Hedwig and the Angry Inch coming up next with eight.

There were some surprises, like the fact that they mustered only four nominees in the Best Musical category, with no love for The Bridges of Madison County, Bullets Over Broadway or If/Then. The nomination for Chris O'Dowd as Best Actor in a Leading Role for Of Mice and Men wasn't entirely surprising, although the production wasn't exactly a critics' favorite. But there was no space for Daniel Radcliffe in The Cripple of Inishmaan or Denzel Washington in A Raisin in the Sun, which were more well regarded. Ian McKellen and Patrick Stewart also came up empty for their performances in No Man's Land and Waiting for Godot and Zachary Quinto was the only member of The Glass Menagerie cast not to get a nomination.

I'm also a little miffed that Santino Fontana didn't score a nod for playing Moss Hart in Act One, although the oldest version of Hart in the play, Tony Shalhoub, did. Fontana has to run several miles a performance to play his Hart, and he should've been recognized for that, as well as for being adorable and fabulous in general. While we're on the subject of Act One, it might have been nice to see Andrea Martin on the Featured Actress list for her scene-stealing performance as Aunt Kate.

Meanwhile, Britain's Mark Rylance, a two-time Tony winner, took two nominations this time out for roles in Shakespeare plays. His turn as Richard III in Richard III earned him another nod as Best Actor in a Leading Role in a Play, while his Olivia in an all-male Twelfth Night pulled in a nomination in the Featured Actor category. I am not a big Rylance fan -- he was the first Artistic Director of the Globe Theatre but he's a Shakespeare denier, which I find quite odd -- plus I'm not enthusiastic about the conceit of all-male Shakespeare shows when good roles for women in Shakespeare are already scarce. But he certainly does play well to the Tony committee.

The only one who plays better may be Audra McDonald. She's won five Tonys already, and if she picks up the award for Best Performance by an Actress in a Leading Role in a Play for her work in Lady Day at Emerson's Bar & Grill, she will set a new record with six acting Tonys, including one in each of the four major categories.

Best Play
Act One, by James Lapine
All the Way, by Robert Schenkkan
Casa Valentina, by Harvey Fierstein
Mothers and Sons, by Terrence McNally
Outside Mullingar, by John Patrick Shanley

Best Revival of a Play
The Cripple of Inishmaan, by Martin McDonagh
The Glass Menagerie, by Tennessee Williams
A Raisin in the Sun, by Lorraine Hansberry
Twelfth Night, by William Shakespeare

Best Performance by an Actress in a Leading Role in a Play
Tyne Daly, Mothers and Sons
LaTonya Richardson Jackson, A Raisin in the Sun
Cherry Jones, The Glass Menagerie
Audra McDonald, Lady Day at Emerson's Bar and Grill
Estelle Parsons, The Velocity of Autumn

Best Performance by an Actor in a Leading Role in a Play
Samuel Barnett, Twelfth Night
Bryan Cranston, All The Way
Chris O'Dowd, Of Mice and Men
Mark Rylance, Richard III
Tony Shalhoub, Act One

The 2014 Special Tony Award for Lifetime Achievement in the Theater will be presented to costume designer Jane Greenwood, while President and CEO of The Actors Fund Joe Benincasa, photographer Joan Marcus and general manager Charlotte Wilcox will receive this year's Tony Honors for Excellence in the Theater.