Funny and Fizzy CHAPERONE at IWU 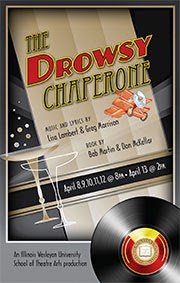 If you grew up with a love for musicals even though you were in no position to actually see them on stage, you'll understand Man in Chair, the narrator in The Drowsy Chaperone. He sits alone in his apartment, listening to his beloved cast recordings of shows he never saw, conjuring up the entire shows in the living room of his imagination.

The show Man in Chair is creating for us is, not surprisingly, also called The Drowsy Chaperone. The musical inside the musical involves a house full of people getting ready for a wedding. It seems that Broadway sensation Janet Van de Graaf is quitting the stage to marry rich, handsome Robert Martin, although producer Feldzieg (Ziegfeld backwards, get it?) knows he'll be ruined if his big star decamps. That brings in various people trying to keep the wedding going or break it up, including an anxious best man, the flighty lady who owns the house and her butler, a pair of gangsters dressed as bakers, a Latin lover intent on seducing the bride, and, of course, her chaperone, who is generally more what I would call soused than drowsy.

There are in-jokes for fans of stage musicals of the 20s, like a throwaway bit about "Ukulele Lil," supposedly the stage name of the actress playing Mrs. Tottendale. Ukulele Lil sounds a lot like Ukelele Ike, AKA Cliff Edwards, who did his specialty ukulele numbers in musicals like Lady Be Good before becoming the voice of Jiminy Cricket. And in telling you that, I sound a lot like Man in Chair, who pops up as the show proceeds to fill in the blanks on the forgotten performers who populate The Drowsy Chaperone's show-within-the-show.

There's also the over-the-top Lothario, the character called Aldolpho (he has a whole song about his name) supposedly played by an actor named Roman Bartelli who specialized in playing ladies' men with heavy accents. The accent and general demeanor are reminiscent of Erik Rhodes, who played Tonetti -- a hired co-respondent with a personal motto in the neighborhood of "Your wife she is safe with Tonetti, he prefer spaghetti" -- in Gay Divorce on Broadway and The Gay Divorcee on film.

All of that means that The Drowsy Chaperone is a gold-mine for fans of old musicals. It's also a lot of fun for people who don't know anything about that sort of thing, however, with its sunny, silly production numbers and fizzy performances.

Illinois Wesleyan director Thomas Quinn and his musical director, Sandy DeAthos-Meers keep the music coming and sounding delightful throughout their Drowsy Chaperone, with especially good vocals from Marek Zurowski as the groom inside Chaperone. He gets to roller skate and tap dance, too, and he does a fine job all around.

Jenna Haimes also stands out as the chaperone, the one who drinks too much but always manages to belt out an uplifting anthem somewhere or other, and she has an excellent comedy partner in Jordan Lipes, who has higher hair than Elvis as the ridiculous Aldolpho.

Erica Werner's Janet van de Graaff is brassy and fun, and she sounds great on her second-act torch song about putting a monkey on a pedestal. (Yes, The Drowsy Chaperone has a number about monkeys.)

Others with good contributions include Steven Czajkowski and Nick Giambone as the two gangsters with a "Toledo Surprise," Will Henke as bouncy best man George, and Halimah Nurullah as Trix the Aviatrix, who is sort of a deus ex machina in an airplane.

In the end, however, every Drowsy Chaperone depends on its Man in Chair. He's the one who runs the show. He's the one who gives it a heart and makes it amount to more than just a spoof of 20s musicals. For IWU, Elliott Plowman, gives us a sweet and dippy version of Man in Chair, someone with a frantic edge and a definite temper. He has the audience pulling for him and his musical, and that's what counts by the time we get to the "Finale Ultimo."

For more information or to make reservations, click here.