Make a Date to Try Out for MY FAIR LADY 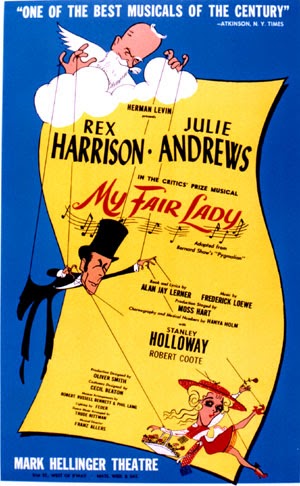 If all you want is a room somewhere, far away from the cold night air, and perhaps one enormous chair, well, I have some loverly auditions for you.

Auditions for Prairie Fire Theatre's production of Lerner and Loewe's My Fair Lady, directed by Rhys Lovell, are scheduled for tonight and tomorrow night, June 12 and 13, from 6 to 8 pm, in Presser Hall, room 16, on the Illinois Wesleyan University campus. Lovell has added more audition dates, too, so if Monday or Tuesday, June 15 or 16, between 5 and 7 pm, fits your schedule better, that is also an option.

Lovell has already cast the mellifluous Joe Penrod, who has appeared recently in A Little Night Music with Prairie Fire and Other Desert Cities at Heartland, as Professor Henry Higgins, but all the other roles -- including the plum roles of Eliza Doolittle and her dad, the one who needs a little bit of bloomin' luck -- are up for grabs.

Eliza Doolittle, the flower girl at Covent Garden snatched up and remade by an egotistical linguistics professor in order to win a bet, has been played by the likes of Julie Andrews, in the Broadway production, and Audrey Hepburn, on film. Although Hepburn and her gorgeous costumes from the film are synonymous with Eliza in many people's eyes, she didn't actually sing the aforementioned "Wouldn't It Be Loverly?" or "I Could Have Danced All Night" or any of Eliza's famous songs. Instead, Marni Nixon dubbed them all. Audrey Hepburn still looked loverly in the Cecil Beaton-designed outfits, however.

Rex Harrison played Higgins opposite both Andrews and Hepburn, and he thanked both when he won an Oscar for the role. He also won the Tony as Best Actor in a Musical, one of six Tony Awards the musical won, including Best Musical

The musical is based on George Bernard Shaw's Pygmalion, wherein Professor Higgins and his friend Colonel Pickering make a wager that centers on whether Higgins can teach a Cockney flower seller to speak properly enough to pass as a lady at a posh garden party. In the musical version, that is transformed into the Ascot race course and an Embassy Ball, and on film, it's Ascot that spawned all the nifty black-and-white costumes that many stage productions still pick up.

As Henry Higgins schools Eliza on proper pronunciations ("The rain in Spain falls mainly on the plain" and suchlike)  as well as dress and decorum, issues of identity, agency and what makes someone who they are arise. And different productions interpret the end and whether there is a possible Happily Ever After for Henry and Eliza differently. We'll have to wait to see what spin Lovell and Penrod and the rest of the cast put on My Fair Lady when it plays from July 31 to August 3 at IWU's Westbrook Auditorium.
Posted by JulieK at 4:38 PM