The Illinois Shakespeare Festival doesn't begin its mainstage performances of Much Ado About Nothing, Elizabeth Rex and Antony and Cleopatra until July 8, but in the meantime... The Festival's free Theatre for Young Audiences show has already begun.

This year, the TYA show is Shake, Shake, Shake Your Shakespeare, written by Nancy Steele Brokaw. And here's how the ISF describes what exactly this Shake is all about:


"Shake, Shake, Shake Your Shakespeare is the new, FREE theatre show for all ages that features Young Will as he learns about the art of storytelling. The show includes several familiar story book characters including Old Mother Goose, who becomes a kind of mentor for Young Will on his adventure. Together, with the audience, Old Goose and Young Will travel though several of Shakespeare's plays, learning about how to best tell a story."

The show took its first bow yesterday at the Ewing Cultural Center. In the rest of June, Shake, Shake will tour to the Immanuel Health Center in Bloomington on the 21st, come back to Ewing Manor on the 25th and make a stop at the Farmers Market in Bloomington on the 28. In July, look for this "interactive adventure" at Ewing Manor on Wednesdays and Saturdays except Saturday, July 19, when the troupe takes a trip to Franklin Park as part of Bloomington's Lincoln's Festival. All shows begin at 10 am. 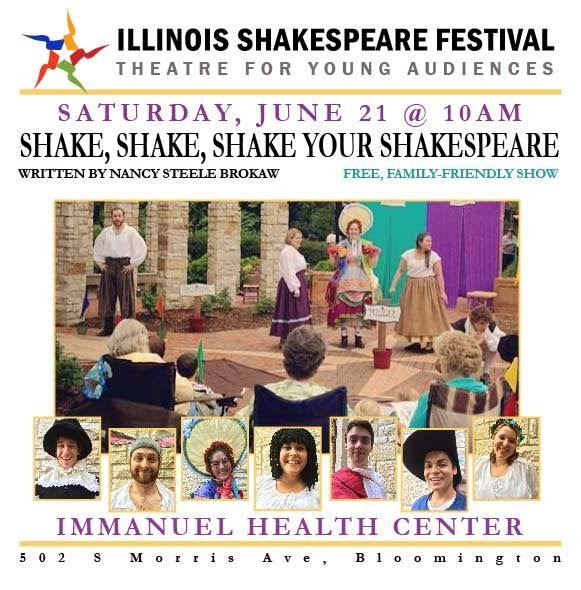 Shake, Shake, Shake Your Shakespeare is a 45-minute show, completely free and intended for all ages. It is especially geared to the youngsters among us who might otherwise be confused or uncertain about their capacity to fully embrace Shakespeare. Shake, Shake shows them exactly how embraceable -- and fun -- Shakespeare and live performance can be. Outside! In the sun!

For more information on all this summer's activities at the Illinois Shakespeare Festival, click the link under their name or check out their Facebook page.