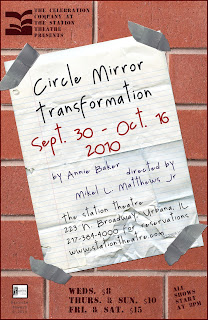 Annie Baker's "Circle Mirror Transformation" took New York by storm last year, with a Playwrights Horizon production that won the Obie for best new play, best director and best ensemble. After New York, "Circle Mirror Transformation" has been everywhere in one short year, from the Guthrie in Minneapolis to South Coast Rep in California to a current production in New Jersey starring Sandy Duncan. Yes, that Sandy Duncan. The play is also slated for inclusion in the Best Plays Theater Yearbook.

What's so special about "Circle Mirror Transformation"? And what the heck does that title mean?

The play is popular, for one reason, because it seems fairly easy on its face to produce. Small cast (five), easy set (a plain room with an exercise ball and a hula hoop and maybe a few chairs), and a central theme that strikes an immediate chord (how we connect to each other). It doesn't hurt that it's about a theater class, filled with five regular old people, and people who work on theater are likely to find the class and the goofy exercises its members take on (the reason for the title) very familiar.

What is really special about the play, though, is how Annie Baker uses those exercises and seemingly small, unimportant interactions among these drama students to flesh out her characters and their lives, to make us care about Schultz, recently divorced and very much alone; Lauren, a teenager with some problems at home who wants to be an actress or maybe a veterinarian; and Marty, a sort of earth mother in yoga wear who runs the class. I have to admit, I care less about the two other, flashier members of the class. There's James, married to Marty, someone who went to law school but decided the legal world was too traditional and compromised for him, and beautiful Theresa, who was an actress in New York for awhile but now finds herself in Vermont with the rest of these folks. She's coming off a bad relationship and maybe looking for a new one. Or maybe not. Or maybe she wants to be a massage therapist. Or maybe she doesn't.

"Circle Mirror Transformation" is the perfect kind of show for Urbana's small Station Theatre, given its set and cast requirements, and director Mikel Matthews creates the right mood, with an emphasis on character and the psychology of the piece. This is a delicate play, dependent upon moments of recognition and bittersweet comedy to get the point and the characters across, and that works well for the most part, especially when David Barkley is on stage. His portrait of Schultz is deep enough and sweet enough to pull the audience along.

The only downside is that Baker's script includes a lot of pauses, especially when the characters are supposed to lie in a circle and do a group count to ten (yes, this exercise is as odd as it sounds). Those pauses, as well as frequent blackouts for everybody to change clothes, slow down the pace a bit too much.

Still, this is a clever, poignant show, well worth the two hours you'll spend with it. Due to scheduling issues, I didn't get to "Circle Mirror Transformation" until the last night of its run, which means you will no longer be able to catch the Station production. Given how many productions it's already had and how many more are scheduled at various theaters (including Victory Gardens in Chicago next February), I doubt it will be hard to find a production of “Circle Mirror Transformation" if you really want one. And anyone who's ever had a theater class is going to want one.