"The Bald Soprano" and "The Lesson": Going in Circles at Krannert Center 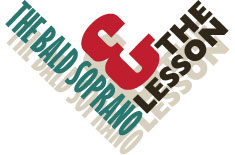 At some point in my academic life, I had a French language textbook written by absurdist playwright Eugène Ionesco. I don’t remember much about it, except that instead of the usual “How are you today?” and “Can you tell me how to get to the library?” it contained interesting dialogue like “Your nose looks like a circular staircase.”

For me, that pretty much sums up Ionesco. He’s going to go a direction you don’t expect, he isn’t going to make a whole lot of sense, and the people in his plays may end up going in circles. “The Bald Soprano” and “The Lesson,” the two one-acts chosen by the U of I Department of Theatre to open their fall season, are quite different from each other, but either one could contain the line “Your nose looks like a circular staircase” with no problem at all.

“The Bald Soprano” is the more absurd of the two, with no plot and no real characters, just a quartet of proper British people, a maid and a fireman, and a lot of nonsensical dialogue about buttered potato jackets, a family where everybody is named Bobby Watson, the curative powers of yogurt, how baffling it is to run into your spouse, and a desire for fire. Commentators have suggested that it illustrates the futility of language and communication, and that certainly seems apt.

“The Lesson” is more sinister, with an increasingly frustrated professor, an impossible student, and a maid whose main function seems to be to act as the professor’s clean-up crew after he loses his temper.

Both are directed by Tom Mitchell on a bright white pop art set designed by Moon Jung Kim. “The Bald Soprano” gets four off-white comfy chairs and a big clock with only one hand, while “The Lesson” has a blackboard and sturdy wooden tables and chairs, but it’s still minimalist and strange enough to create the mood.

The best part of “The Bald Soprano” is the over-the-top gestures from Jeremiah Lowry and Neala Barron that bring to mind Monty Python’s Ministry of Silly Walks. Except this would be the Ministry of Silly Gestures. That part is funny and fresh and definitely works to set up the absurdity. Still, this production, using a new translation by Tina Howe, seems too long by at least 15 minutes and moves from absurdity to annoyance well before the curtain.

After the break, we see “The Lesson,” which is also funny at first, with Doug West and Jaclyn Holtzman nicely showing how inane education can be. The opening night audience, filled with both professors and students, understood that part of “The Lesson” quite well. But then the play gets darker and creepier, and the pace speeds up and then slows down, and Howe’s translation goes completely off the rails. I’ve never seen audience members leave during a performance at the Studio Theatre, but we had several departures this time. Forewarned is forearmed: There is shouting and violence in “The Lesson.” It gets ugly.

Remember what I said above, about being too long and moving from absurdity to annoyance? That goes double for "The Lesson."

If you like Theatre of the Absurd, if you have seen “The Bald Soprano” and “The Lesson” before and you know what you’re in for, you may very well appreciate this double bill. Otherwise… You may find these plays like a circular staircase that goes absolutely nowhere.

The Bald Soprano and The Lesson
by Eugène Ionesco, translated from the French by Tina Howe

Running time: 2:25, including one 20-minute intermission

Note: This review originally appeared in the Champaign News-Gazette.
Posted by JulieK at 10:12 AM