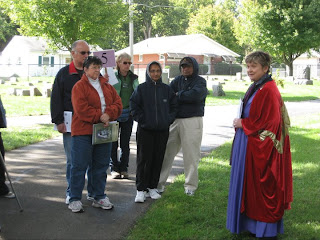 As I write this, we are past the halfway point, with some 56 performances of our individual pieces left. Tomorrow, we'll see more school groups, with the general public returning to Evergreen Cemetery on Saturday and Sunday.

Whew. I knew this would be a challenge, to keep my wits about me during all these repetitions of my speech, and I was right! But the weather today was so impossibly gorgeous that I can't complain. I'm not usually outside that much, so getting to sit in a beautiful place with sun and breezes and charming squirrels trying to pelt me with walnuts... Well, it was quite pleasant, as my character, Lucy Orme Morgan, might say.

From chatting with my husband, who was a tour guide yesterday, and some of the children who've passed through, I now know that there are two characters who stand out as audience favorites for the younger set. They seem to like Grace Jewett Austin, the society reporter and fashion columnist who had a thing about elephants, and Christoph Mandler, the German immigrant who rolled cigars for a living and also sang and danced with a home-made dance partner.

That's Grace up top, portrayed by Irene Taylor, resplendent in her red cape. She extols the virtues of wearing color, tells a bit about her life as a reporter, and fills the audience in on her elephant collection. I happen to know she has already received a lovely picture of several elephants as a contribution to the collection, with another offer to bring some sort of elephant toy back later. Her costume is also a big hit, but you'll have to come to the walk if you want to know the particulars. And if you've already done the walk and you know the big secret, don't spoil it for everybody else, okay? 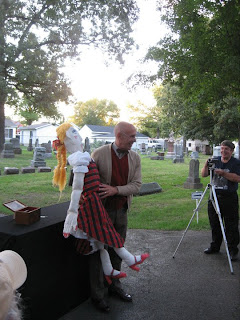 Christoph, played by Michael Pullin, does some show and tell, as well. He not only dances with Matilda, his doll of a dance partner, but he shows his audiences how to make their own cigars. That's not something you see every day. Michael reports that he hasn't yet sent any cigars home with the youngsters, but he thinks he could probably get a few new customers if he tried. I'm sure their parents are happy he hasn't actually sold any cigars, though.

So that's what awaits you at the Discovery Walk. Come out Saturday or Sunday, at 11 am or 2 pm, to see Grace and Christoph and the other six folks who are not offering elephant or cigar madness!
Posted by JulieK at 6:46 PM