On the Horizon in October 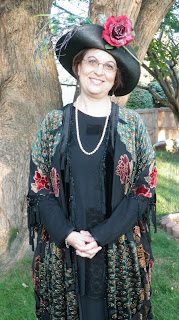 I've already discussed the Evergreen Cemetery Discovery Walk 2010 (instead of just writing or acting as a tour guide, I'm performing this time) and it starts TOMORROW. Do not miss! I'm playing Lucy Orme Morgan, a strong proponent of social welfare programs for children, one of eight characters from Bloomington-Normal's past featured this year. You'll find tour times and ticket prices here. As a sneak peek, I'm showing you the picture (at left) of me in my Lucy Orme Morgan finery.

Urbana's Station Theatre continues Annie Baker's Circle Mirror Transformation, which may be this year's hottest play, through October 16th. Director Mikel Matthews was kind enough to share a script with me (it still hasn't been published as far as I know, although it's been tapped for the 2010 Best Plays yearbook) and I can verify that Annie Baker's writing is crisp, funny and insightful, and she makes a lot out of those silly exercises anybody who's ever been in an acting class is familiar with.

The Art Theater in Champaign is showing Oliver Stone's South of the Border, what they are calling a "divisive documentary about Latin American leaders." The Art promises speakers for almost every showing from tonight through October 6th. FMI or the full schedule, try their website.

The Normal Theatre opens its LGBT FEST with a new documentary called Stonewall Uprising on the 5th and 6th, followed by Howl, starring James Franco as poet Allen Ginsberg, on the 7th, and Leading Ladies, a ballroom dance movie filmed right in Champaign-Urbana, on the 8th.

One of my favorite musicals, The 25th Annual Putnam County Spelling Bee, opens at ISU's Center for the Performing Arts October 6th, directed by Cyndee Brown. If you get there early, you might be chosen as a guest speller, and you'll get to go right up there on stage with ISU's performers. You don't get to sing, but you should get to dance around a little. And spell, of course. I was picked when I saw the show in Chicago, and they asked me to spell jihad, balmacaan and Lysergic Acid Diethylamide, in case you'd like to study ahead. "Putnam County" runs through October 16th, which includes performances on Homecoming weekend, so you are forewarned to get your tickets now.

Do you dance in the garden in torn sheets in the rain? Do you wear your hair in a beehive? Did your ear lobe ever fall into the deep and turn into a lobster? If you answered yes to any of those, you'll want to attend the B-52s concert at the BCPA on the 6th. Love Shack, baby!

U of I opens its fall season with two short absurdist comedies, The Bald Soprano and The Lesson, from Eugene Ionesco on October 7th in the Studio Theatre, and then brings Macbeth right behind in the Colwell Playhouse on the 14th.

I am definitely looking forward to Eureka College's 21st Century version of Shakespeare's As You Like It, directed by Holly Rocke, opening October 12 in Pritchard Theatre. Rocke promises that Rosalind will be in a football uniform and we'll see Wii Boxing instead of wrestling.

Prairie Fire Theatre goes back to what it does best with An Evening with Gilbert & Sullian October 15-17, at Westbrook Theater in Presser Hall on the IWU campus. Prairie Fire promises "a glorious night of all your favorites."

In its second show of the month, ISU brings Shakespeare's Measure for Measure to Westhoff Theatre October 27-31. "Measure for Measure" is the one with the corrupt judge, the novice nun he tries to blackmail into sleeping with him, and a whole lot of rotten in the duchy of Vienna.

Illinois Wesleyan continues its fall season with Martin Crimp's Attempts on Her Life, a post-modernist piece of theater that stretches the definition of "play," in performance October 28-30 in the E. Melba Kirkpatrick Laboratory Theatre. Ally Moravec directs for IWU.

Just in time for Halloween, Dracula comes to Community Players. Performances run from October 29 to November 13, and Paul Vellella plays the dark count who wants to suck your blood.

And if you can make it to all of that, you will have one very full October!
Posted by JulieK at 12:38 PM