"As You Like It" Goes Wiild at Eureka College 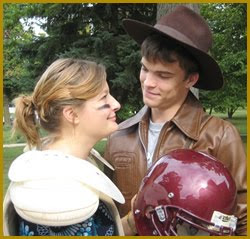 It’s a cool idea, on paper, to turn the wrestling match in “As You Like It” into Wii boxing and the music into Rock Band. After all, the main characters, lovestruck Rosalind, on the lam from her wicked uncle’s machinations, and brave Orlando, who has been mistreated by his older brother and needs to find his own place in the world, are young, energetic and loose in the Forest of Arden without parental supervision. Rosalind is disguised as a boy, and she’s brought along her cousin Celia and the fool Touchstone, and then meets up with Orlando, someone she already fell in love with at that wrestling match (which he won) and pretends to teach him how to woo her real self. It’s mostly good fun, with another romance from a smitten shepherd and a surly shepherdess tossed in, plus the melancholy Jacques, a forest philosopher attached to Rosalind’s dad, the exiled Duke who hangs out in the woods with his merry men.

The characters are young, their toils are not so different from today’s texting and twittering teens, and putting Playstation and X box into the mix seems like a fun, fresh idea. At Eureka College, director Holly Rocke not only adds video game touches, but gives her actors cell phones to snap pictures with and Homer Simpson slides as a backdrop.

There were a lot more projections than just Homer Simpson, but I’m afraid I’m not a video game person, and I have no idea what most of them were. Gollum from “The Lord of the Rings” popped up. So did actor Orlando Bloom to give us an idea how dishy the Orlando in the play is. But the rest? I just don’t know my Pokemon from my Mortal Combat or any points in between.

And therein lies the rub with this fun idea to bring “As You Like It” into the 21st Century. Adding the pop culture references is great for the kids in the audience, but I fear they lose sight of the Shakespeare, while the old folks can do the Shakespeare, but are lost in the Myst. It might’ve been better to write a new play with the same basic “As You Like It” plot – banished girl, evil uncle, hot guy who falls for her the minute he sees her – and play it out with modern English that suits the light sabers and joysticks the kids are wielding. Kind of like Hollywood turning “Twelfth Night” into “She’s the Man” and “The Taming of the Shrew” into “10 Things I Hate About You.”

But this way… There’s life and joy here, but the language seems well beyond these youthful actors’ range. As a result, the story gets lost, and all anybody is going to remember is that Rosalind was in a football uniform, Orlando dressed like Indiana Jones, and Celia dragged around an adorable yellow stuffed animal that I think came from Pokemon. Oh, and everybody sang “YMCA” at the end.

Running time: 2:15, including one 10-minute intermission

Remaining performances: October 13-16 at 7:30 pm, October 17 at 2 pm, with a post-show discussion following the October 14th performance
Posted by JulieK at 10:49 AM