Stunning Backstage "Macbeth" Impresses at U of I 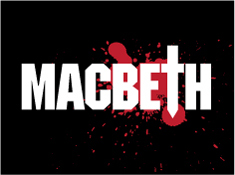 By the pricking of my thumbs, something wicked this way comes…

Wickedness doesn’t have to be complicated or given to excess, demonstrated quite clearly by the stripped-down, inside-out “Macbeth” on stage at Krannert Center’s Colwell Playhouse. And when I say “on stage,” I mean exactly that. Not only is the murderous action of “Macbeth” on stage – so is the audience.

Director Robert G. Anderson, a fine Shakespearian actor himself, has chosen to place the audience on risers at the very back of the stage, with all the backstage ropes and pulleys visible. Most of the first act plays on the stage directly in front of the audience, behind the proscenium curtain, with that curtain opening up and action moving into the wide vista of the Colwell Playhouse auditorium after intermission.

Anderson goes for spare, stark stage pictures, with limited props and scenery. Lighting Designer Devi Carroll uses hand-held work lights and bare, blazing spotlights to throw deep shadows, while Sound Designer Theresa Huber adds strange, strident sounds, with light and sound both contributing to the harsh, ominous mood of the play. Grant Bowen’s scenery is equally utilitarian and bold, with almost everything given a raw rehearsal look. Among the pieces that work the best are a red velvet throne suspended in air to symbolize the prize everybody wants, a dining table that splits apart at just the right moment, slamming trap doors, and a plain white bathtub that becomes a cauldron, a percussion instrument and a hiding place for a child as the evening progresses.

Annaliese Weber’s costumes continue the stripped-down motif, putting the men in generic military jackets worn with jeans and boots and the women in layers of Victorian underwear. There’s a lot of white, cream and gray on display here, with only the red throne and Duncan’s regal yellow cape breaking out.

It’s all quite dramatic and theatrical, underlining and ratcheting up the tension of the plot, as Mr. and Mrs. Macbeth up the ante of their ambition and its attendant madness.

Christopher Sheard and Bri Sudia are fierce and compelling as Macbeth and his lady, going right for the passion and the crazy and never letting up. Lisa Gaye Dixon’s gender-bent Duncan is also noteworthy, as is Ethan Gardner’s stalwart Macduff.

Anderson gives us a different take on the three witches, going for a trio of freaky street kids who waft in and out of scenes like dark spirits planting seeds of discord. Witch #1 (Katie Bellantone) is a sideways-skewed woman who appears to be having sextuplets (sort of if Smike from “Nicholas Nickleby” had a huge hysterical pregnancy), Witch #2 (Luke Grimes) is a mincing evil queen, and Witch #3 (Michelle Grube) is a dainty, demented child in petticoats. They’re all plenty frightening and weird, and Bellantone gets major kudos for twisting herself into a knot like that and committing to the posture.

What really works for this “Macbeth” is how consistent the vision is and how well the pieces fit together. It lays bare the machinations of theater and yet uses those tricks to make the play even more theatrical. That’s no mean feat. And this is no mean “Macbeth.”

Running Time: 2:25, including one 20-minute intermission

This review originally appeared in the Champaign News-Gazette.
Posted by JulieK at 9:36 PM