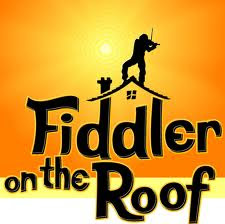 I have been taking some time off, letting my brain (or possibly my spirit) rest a bit, but I intended to review and/or write about the touring company of "Fiddler on the Roof" that played in Peoria last week, as well as some other things ("Mad Men" season finale! New "Sherlock Holmes" on PBS! Outrageous happenings on "Project Runway," a show I both love and hate and sometimes in between!) well before now. So, yes, I'm behind.

But let's begin with "Fiddler," shall we?

I have a soft spot for "Fiddler on the Roof," since my Aunt Mary says that my grandmother (her mother), the diminutive and yet feisty Nettie Cohen Caplan, always claimed that "Fiddler on the Roof" was exactly like she remembered her early life in the Old Country. That isn't really a good thing, I suppose, what with the marauding Cossacks and Jewish people getting forcibly removed from their homes and the general upheaval of a most unhappy kind that keeps punctuating the plot of this musical. But there's also humor there. And faith. I hope my Grandma Nettie remembered and recognized that, too, and that the character of Tevye, the milkman who would like a better life for his family, the one who gives "Fiddler" so much of its warmth and joy, reminded her of her father a little.

As it happens, the touring company that came through the Peoria Civic Center was quite wonderful, with plenty of that warmth and joy from the top of the company (John Preece, who makes a terrific Tevye) down to its smallest member (adorable Melanie Siegel, who plays both Tevye’s daughter Bielke as well as nightmare figure Grandma Tzeitel).

Preece leads the cast with a sure persona and a fabulous voice, channeling Topol’s sparkling presence with just a dash of Zero Mostel. The most familiar tunes – “Sunrise, Sunset” and “If I Were a Rich Man” – seem robust and fresh, which is even more amazing when you consider that Preece has played Tevye some 1500 times in his career. Yet here he is, still giving Tevye all the oomph and energy of a new performance.

I also enjoyed Tevye’s three eldest daughters, each of whom rebels in her own way, as portrayed by Lauren Nedelman, Julianne Katz and Chelsey LeBel, as well as their three suitors, each sympathetic in his own way, played by Andrew Boza, Kevin Stangler and Ben Michael. If I were one of the girls of Anatevka, I’d have a hard time choosing between sweet Motel the tailor (Boza) and idealistic student Perchik (Stangler) myself.

For the touring production, director Sammy Dallas Bayes has reproduced the original Jerome Robbins choreography, and it looks very good on stage, with the familiar bottle dance at the wedding and the fantasy sequence with ten-foot-tall Fruma Sarah both coming off well. Steve Gilliam’s scenic design and Tony Ray Hicks’ costumes are also warm and appealing, creating the right look without wasting a lot of time on scene or costume changes.

This “Fiddler,” produced by Matchmaker Touring LLC, will continue to hopscotch the country till next spring, with dates in Texas, Arkansas and Louisiana coming up next, and a return to the Midwest when it hits Cedar Rapids on December 1st.

Fiddler on the Roof
Book by Joseph Stein, music by Jerry Bock and lyrics by Sheldon Harnick

Thanks to "eldemila" for catching my error on the identification of Tevye's daughters!
Posted by JulieK at 12:25 PM