All Kinds of Discoveries at the Discovery Walk 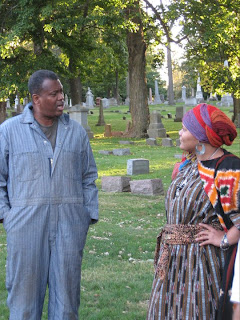 As you know if you've been keeping track of my blog, I am performing in this year's Discovery Walk at Evergreen Cemetery. I am playing a lovely woman named Lucy Orme Morgan, a suffragette (apparently "suffragist" was a less derogatory term at the time, but "suffragette" was sort of adopted by the women themselves, losing the negative connotations. I like "suffragette" because it reminds me of "Suffragette City," a song by David Bowie. I never have had a clue what "Suffragette City" means, but it was a fun song when I was 12) and social reformer who played a crucial role in organizing and creating a home for girls in the late 19th century.

This is my first experience as an actor in the Discovery Walk, although I have written for them before and acted as a tour guide. My husband is a tour guide again this year, and I am enjoying seeing his friendly face at the head of a group when they round the bend in front of me.

So far, we have completed one weekend, with a total of 32 performances each, and two weekdays, with a total of 48 performances each. We are, as it happens, at the halfway point. I wasn't sure how difficult that would be, with so many repetitions, and I have to say, it is definitely challenging! But today, while we had school groups in attendance, the weather was gorgeous, the kids were great audiences, and I definitely enjoyed myself. It helps that my character's great passion was taking care of children. I think how Lucy Orme Morgan would've reacted to all those charming faces, and that makes me smile when I'm looking out at them.

There are eight groups traversing Evergreen Cemetery during a session, and eight characters for those groups to visit. The characters include a longtime zookeeper at Miller Zoo (played by Bob Thurmond, shown above with Tori Allen as the Griotte who helps tell his story); the mother of a presidential candidate; a society reporter and fashion columnist with national influence (I wrote this one); a (possibly) corrupt mayor; a singing and dancing German immigrant who made and sold cigars; a man invested in packing pork until the stench angered his neighbors; and an incredibly successful inventor with vision problems who could barely see his own customers. 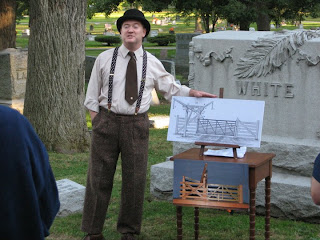 The Discovery Walk has been fascinating in each of the roles I've played, mostly because I am not originally from Bloomington-Normal, and I don't really know its history all that well. I love history, though, so I enjoy getting to meet the characters who made these towns and this area what it is. Plus, Judy Brown, who runs the creative side of the proceedings for Illinois Voices Theater, attracts some terrific actors to play these folks. So you'll see sterling performers like Kathleen Kirk (playing Helen Davis Stevenson this time), Rhys Lovell (as inventor William White, seen above showing off one of his inventions), and Todd Wineburner (taking the role of former mayor Daniel Foster). 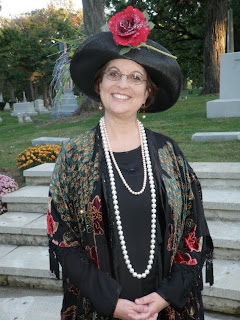 Schools will continue to visit this week, with public performances open again on the weekend.

I will blog again about my Discovery Walk experience, so look for more posts and more pictures later. In the meantime, buy your tickets at the McLean County Museum of History, the Garlic Press or Evergreen Cemetery, and come out to Evergreen Cemetery to join us at 11 am and 2 pm on Saturday and Sunday. I'll be the one with the big red rose on my hat!
Posted by JulieK at 7:16 PM