"Three for the Show" Ready to Go at Heartland 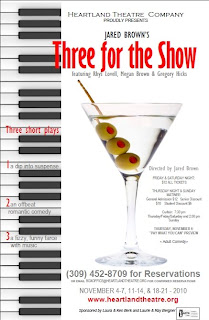 Local audiences are familiar with Jared Brown, Illinois Wesleyan University Emeritus Professor of Theatre Arts, as an author, director and actor. In THREE FOR THE SHOW, Brown takes on the role of playwright with three short, provocative plays, coming very soon to Heartland Theatre Company in Bloomington-Normal.

There’s offbeat romantic comedy in MÉNAGE À TROIS, a dip into suspense with RAGE, and a fizzy, funny farce, complete with musical numbers in GEORGE AND IRENE. Brown’s three plays couldn’t be more different, but each features three characters, and those characters will be played by the same three actors (Megan Brown, Gregory Hicks and Rhys Lovell). All’s fair in love and war in Brown’s irreverent look at relationships times three!

THREE FOR THE SHOW opens November 4th with an open dress rehearsal on Pay What You Can Night, with regular performances November 5-7, 11-14 and 18-21. Curtain is at 7:30 pm Thursday through Saturday and 2 pm on Sundays.

There will be a special post-show discussion with playwright Jared Brown after the Sunday matinee on November 7th. Estimated time for the discussion to begin is 3:45 pm if you've already seen the show or plan to see it later but would like to join the discussion.

You may call 309-452-8709 for reservations, or visit the Heartland Theatre Company website for more information.
Posted by JulieK at 11:29 AM