I have mixed feelings about this. It's been fun, I love the actors and volunteers I've been hanging out with, and I love Lucy Orme Morgan, the person I'm portraying. She is a force of nature, and it's really fun to play her. But it's also been challenging, with freezing temperatures last weekend and the prospect of hot hot hot happening tomorrow and Sunday, plus a whole lot of interesting things popping up along the way. I've been interrupted by squirrels throwing acorns, a very long siren, a few trains, and a pair of tap-dancing teens. (I think they were communicating in Morse Code, but I'm not sure.) One early day, I was visited by about a dozen people who spilled out of two vans right next to where I was performing to visit the graves of their ancestors. My character was related to them, too, and when I told them that's who I was, one of them said, "I know you!" as if I really were Lucy Orme Morgan. That's not something that happens every day.

Since this may be the only time I ever do this, I already know it will be bittersweet turning in these final performances. 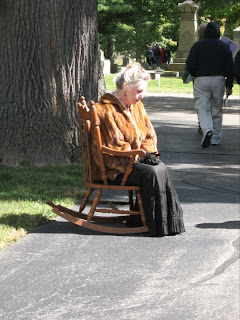 Until then, I thought I would tell you about a few more of the characters you'll meet if you decide to come out to Evergreen Cemetery on Saturday or Sunday. This trio includes tragedy and comedy, as befits theatrical proceedings. First up is Helen Davis Stevenson, the lady of constant sorrows. Unhappily married, this prominent citizen became a little too attached to her children, following them to college and worrying about them to excess even when her own health became compromised. Kathleen Kirk wrote the piece and plays Helen, in what Judy Brown, who runs Illinois Voices Theatre and shepherds the entire dramatic process, calls an Oscar-worthy performance. It's good to add a few tears to the mix, and Kathleen definitely provides those. 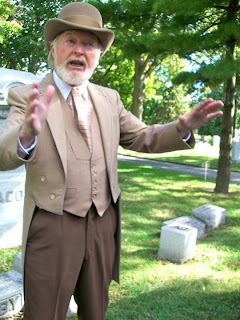 William Van Schoick, one of the founders of the Bloomington Pork Packing Company, is on the lighter side of the theatrical aisle. His pork place was more than a little smelly, and it caused quite a stir among Bloomingtonians who didn't appreciate the stench in their neighborhood. Ron Emmons plays Van Schoick with an irascible wit and good curmudgeon spirit. Emmons also wrote the Van Schoick speech, so if you visit, be sure to yell "Hogwash!" at him.

And last up today is Daniel Foster, a larger-than-life political character who served several terms as mayor, pulled in support from both parties, and definitely knew his way around palm-greasing, vice and liquor as a way to get out the vote. Todd Wineburner gives Mr. Foster a Dickensian polish, with a shiny badge on his lapel that says "Mayor," just in case anybody forgets the office Foster once held. He's funny and energetic, with a politico's bluster and a way with words. John Kirk wrote the Foster piece, a full-bodied rant about blue-nosed Republicans and ladies of the evening as well as the bogus (in his opinion) charge that got him indicted for official misconduct. 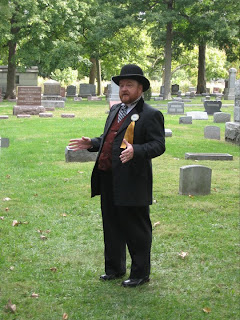 That's Todd over there on the right, showing off his best Daniel Foster oratorical style, complete with "Mayor" badge.

Remember, you only have four chances left to catch the 2010 Discovery Walk at Evergreen Cemetery. Your last chances are at 11 am and 2 pm on Saturday and Sunday.

See you at the cemetery!
Posted by JulieK at 7:13 PM