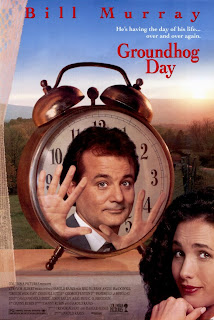 I never really got into Groundhog Day as a holiday. I guess by February 2nd I am so ready to be done with winter that letting my fate -- even my pretend fate -- hang on the whims of a rodent -- even a large, cuddly rodent -- has never appealed to me.

But then along came "Groundhog Day," the adorable 1993 Harold Ramis-directed romantic comedy, with Bill Murray as a selfish weatherman who needs to learn the value of being a real human being to get out of the eternal loop of repeated Groundhog Days. Ramis and Danny Rubin wrote a warm, sweet, beautiful script that flips all my switches, and Murray turned in one of his best performances ever. As his love interest, Andie MacDowell is also right on target. The cute, funny groundhogs in the film (especially the one driving the car) make me forget for a minute that they really are rodents.

To celebrate Groundhog Day in style, you have several choices. You can get a copy of the film, of course. I heartily recommend it. You can travel to Punxsutawney, Pennsylvania, the classic locale where they wait for groundhog Punxsutawney Phil to emerge from his burrow. ("Groundhog Day," the movie, purports to be taking place in Punxsutawney.)

You can also drive up to Woodstock, Illinois, where the film was actually shot. If you're lucky, locals will point out the house where Bill Murray's Phil Connors woke up every day, the restaurant where the TV crew hangs out in the movie, and the curb where Phil steps into an icy puddle to avoid Ned Ryerson. (I went to high school in the Chicago suburbs with a guy named Ned Ryerson, and I've always wondered if Harold Ramis, who is from Chicago, knew him or named the character after him. He was certainly nothing like this Ned Ryerson, a pushy, overly friendly insurance agent played by Stephen Tobolowsky. Only Harold Ramis knows for sure!)

If Punxsutawney and Woodstock are too far to go, you do have a lovely Central Illinois choice this year. Wildlife Prairie State Park, outside Peoria, is presenting their own Groundhog Day celebration on Wednesday, February 2nd, with a fetching groundhog named Gertie (seen at left) doing the honors. Legendary weatherman Willard Scott is flying in to join Gertie and announce the official weather prediction based on whether she sees her shadow. The park is offering "Wake up with Willard and Gertie" tickets, as well as special breakfast packages. You can see all the details and make your plans at the Wildlife Prairie Park website, or call (309) 676-0998. Gertie is pretty irresistible, isn't she?
Posted by JulieK at 12:19 PM