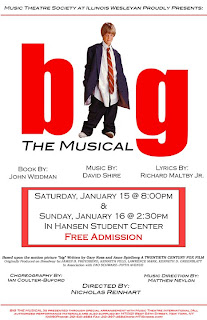 In an attempt to emulate New York's "Encores!" series, which revives forgotten or overlooked shows in a concert setting, IWU's Music Theatre Society brings us "Big: The Musical," the Maltby/Shire musical version of the Tom Hanks movie where an almost-13-year-old wishes he were "big" and is magically transformed into an adult. Like "Encores!", everybody wears black, they use notebooks as props as well as to refer to for the script, and there's a full orchestra with pared-down staging and dances. Unlike "Encores!", Wesleyan's Music Theatre Society does this all for free.

Yes, that's right. In the best bargain in local theater you're going to see this year, admission is free to this concert staging of "Big: The Musical." A whole orchestra plus 20 performers, dances, songs, and two hours and twenty minutes of entertainment, all for free. That is, indeed, big.

I am a bit of a Maltby/Shire fan, so I went to see "Big: The Musical" back in the 90s, plus I bought a cassette of the original cast recording. (And, yes, I did say cassette. It was the 90s.) I loved "Stop, Time," the mother's plaintive plea to keep her children young, and "Stars," the romantic ballad, although I thought some of the more synthesized, poppy parts of the score sounded a little dated even then. I also had some issues with the book of the show, written by John Weidman, especially the squicky moment when 13-year-old Josh is onstage watching his 30-year-old self make out with an adult woman. That last bit demonstrates that, even after his transformation from 13-year-old to 30-year-old, Josh is still a kid inside. A kid who should not, I think, be having sex with adult women. Oh well.

The good news is that in this concert staging, with all college-age performers, that squick factor is eliminated, plus the young director and musical director (Wesleyan seniors Nicholas Reinhart and Matt Neylon) have made the score sound more current and less Flock of Seagulls. Choreographer Ian Coulter-Buford has to work without skateboards or technical pyrotechnics, but he, too, makes it work by simplifying and streamlining.

It's one thing for seasoned Broadway pros to take a week to put this kind of show on its feet in the expansive space of New York's City Center, but quite another for a bunch of college kids to do it inside the small confines of IWU's Hansen Student Center. At the beginning, Reinhart announced they'd had ten days to cast the show and rehearse it, and that shows in some ragged edges around the trickier group pieces, but for the most part, the staging, musical and choreographic choices fit in the space, tell the story and charm the audience. What more do you need?

It helps that there are some really lovely voices in the cast, led by Josh Levinson and Ben Mulgrew as the old and young versions of our main boy, Josh Baskin; Jenna Haimes as Susan, Josh's adult love interest; Melina Rey as his mother; Jacob Krech as Billy, Josh's teen best friend; and Josh Conrad as Mr. MacMillan, the owner of the toy company where Josh ends up working. Mulgrew, Haimes, Rey and Conrad have vocal warmth and color that is especially welcome, while Levinson makes the grown-up Josh appealing with his sweet, effervescent acting presence.

There's a lot to like about this "Big," and a lot to like about IWU's Musical Theatre Society and its mission. The second performance of the show is this afternoon at 2:30, back at the Hansen Student Center on the IWU campus. Again, it's free. What's not to love?

Based on the motion picture "Big," written by Gary Ross and Anne Spielberg.