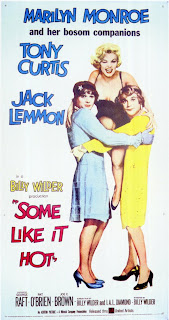 I usually post a monthly preview on the first of the month, but I hope you'll forgive me for being a day tardy this time. I'm now 3/4 of the way through my Fred & Ginger marathon -- I have a habit of picking two Astaire/Rogers pics and watching them on New Year's Eve, but this year I decided to go for eight of the ten (leaving out "Vernon and Irene Castle" and "The Barkleys of Broadway" since they just don't fit) and doing it over this whole New Year's weekend -- so I'm surfacing between "Swing Time" and "Shall We Dance" just to try to put this preview together. I hope you'll forgive me for spending my time with "Never Gonna Dance" and "Pick Yourself Up" instead of paying attention to my blog.

So... January. Well, it's not a particularly crowded month for entertainment, as it happens, although it does have its joys. The Normal Theater screened "Some Like It Hot," the Billy Wilder classic, last night and they'll be showing it again tonight. If you have time to get there, it's definitely with the trip, with fizzy, fun performances from Tony Curtis (doing his best Cary Grant imitation in several scenes), Marilyn Monroe (both luscious and sweet as she plays chanteuse Sugar, a quintessential Monroe role) and especially Jack Lemmon (seriously funny while masquerading as a girl and fending off the advances of Joe E. Brown.) Curtis and Lemmon both have pretty nice legs in the poster, don't you think? "Some Like It Hot" is guaranteed to heat up your week. If you like It Hot.

Next weekend, the Normal Theater offers a more current choice in "Toy Story 3," which has been lauded as the best of Pixar's nifty "Toy Story" series and as Oscar bait, and then, at the end of the month, "Winter's Bone," a dark tale about a girl from the Ozarks trying to chart dangerous waters to find her father and save her home. "Winter's Bone," which has also gotten Oscar buzz, hits the Normal Theater January 27-30, with all performances at 7 pm.

An unusual choice -- a filmed performance of the Globe Theatre production of Shakespeare's "Love's Labors Lost" -- airs at the Art Theater in Champaign on Saturday, January 8th as part of their special "Performing Arts" lineup. I haven't seen this film, but I'm thinking it's worth a trip to Champaign just to see something on the restored Globe stage. The Art's website doesn't have the time for "LLL" listed yet, but I'm guessing, based on other shows, it will be at 7:30 pm.

The Art is also offering a Kurosawa double feature late this month, with "Ran" and "The Seven Samurai" on January 29 and 30. They're both terrific choices and not screened all that often around here. In fact, I haven't seen either of them since college, so I'm way overdue.

Community Players kicks off 2011 with a 1947 post-war romantic comedy by Norman Krasna called "John Loves Mary." The play lasted a year on Broadway, and then hit the big screen as a Ronald Reagan vehicle. The CP production opens with a preview on January 13th, running till the 29th, with Austin Travis and Hannah Kerns as the John and Mary in the title.

Also opening on Thursday the 13th is Theresa Rebeck's "Mauritius" at Urbana's Station Theatre. Rebeck is known for a sort of diabolical drama with undertones of suspense and betrayal. "Mauritius" sets two estranged half-sisters against three desperate collectors who want some valuable stamps they think the sisters have inherited. "Mauritius" also runs from the 13th to the 29th, with all performances at 8 pm.

The Russian National Ballet Theatre comes to the University of Illinois' Krannert Center for the Performing Arts with Prokofiev's "Romeo and Juliet" on January 18 and 19 and "Cinderella" on the 20th. They promise: "With more than 50 dancers, the Russian National Ballet Theatre under the direction of Elena Radchenko sweeps the majesty of grand ballet history into the Tryon Festival Theatre." Performances are recommended for audiences age 12 and up.

And Parkland College brings out its annual student production, when students select, direct, design and act, on January 19. This year's student show is "Outside the Box" by J.P.S. Yates, which they describe as "an inside look at office politics in the toy world," when downsizing and reorganization plans hit the toys themselves. Please note that seating for "Outside the Box" is on-stage in the middle of the action and therefore limited.

If you've enjoyed area band Hip Pocket and its bluesy rock stylings over the years, you'll want to see their swan song at the BCPA on January 28th. As the Hip Pocket website tells us, "After 5 CDs, hundreds of performances, a double DVD, 3 Presidential Inaugural performances, and sharing the stage with some of the best musicians in the world, the final chapter is about to be written." That means the BCPA concert billed as "The Last Shuffle with Hip Pocket" may be your last chance to see this local favorite. Tickets are $16 for general admission.

Heartland Theatre is dark during January, but don't forget the deadline for Heartland's annual 10-minute play contest (this year's theme is The Back Porch) is February 1st. Time to put the finishing touches on your Back Porch play and send it off!

Coming up: Info about the Illinois Shakespeare Festival in 2011 and a note on a program change in February for ISU.
Posted by JulieK at 2:47 PM