Our Very Own Encores! 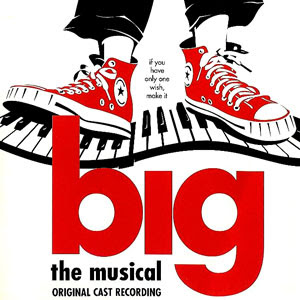 IWU's Music Theatre Society has been taking a page from the Encores! book, with a mission to produce "lost or rarely produced musicals in a concert setting backed by a full orchestra." In previous years, this student-run organization has done "Reefer Madness," "Do Re Mi," "Tenderloin" and "Funny Girl." This year, they're taking on "Big," the musical version of the 1988 Tom Hanks movie, with Nicholas Reinhart taking the directorial reins.

This "Big" (with music by David Shire and lyrics by Richard Maltby, Jr, the creators of "Baby" and the "Closer Than Ever" revue) played Broadway for only 193 performances in 1996, even though it got a big, boffo staging and earned four Tony nominations. All those bells and whistles cost a whole lot of money, making "Big" a big-time box office loser. But the idea behind it -- a 12-year-old boy named Josh wishes he could be big enough to run his own life and gets that wish, including a job at a toy company -- is pretty irresistible, and the bright pop score by Maltby-Shire score is definitely worthwhile. A lot of people predicted that "Stop, Time," the ballad sung by Josh's mother in Act II, would become a staple at bar mitzvahs and graduations.

I haven't heard much about "Big" in awhile, so it's great to hear that Reinhart and his fellow Wesleyan students are taking it on in this concert setting, giving everybody a chance to hear the score. The Music Theatre Society cast includes Josh Levinson as the suddenly adult Josh, Jenna Haimes as his love interest, and Melina Rey as Mrs. Baskin, who gets to sing "Stop, Time."

Performances are scheduled for Saturday, January 15th at 8 pm and Sunday, January 16th at 6 pm at the Hansen Student Center. FMI, click here.
Posted by JulieK at 12:42 PM