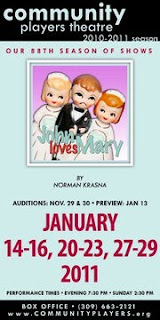 Community Players has announced a special extra presentation to explain and expand upon their current production of Norman Krasna's "John Loves Mary." Krasna's play, a romantic comedy written in 1947, involves a soldier back in the United States after his service in World War II and how he deals with the sticky problem of an English woman who thinks he still wants to marry her when he's already married someone else. To clarify the play's milieu, Community Players has invited ISU English professors Sally Parry and Robert McLaughlin to discuss "The Returning Veteran in World War II Popular Culture" at the theater at 1 pm on January 22nd.

Parry and McLaughlin are the authors of a book called "We’ll Always Have the Movies: American Cinema during World War II," which looks at more than 600 American movies made between 1937 and 1946, from "Casablanca" to "Thirty Seconds Over Tokyo."

In their presentation for Community Players, Parry and McLaughlin will discuss "the ways mid-1940s fiction, drama, and film presented the homecoming serviceman" as well as how those fictional representations "reflected social anxieties about how these men might be changed by their wartime experiences and about how these men might change the society they were returning to." Fascinating stuff, to be sure.

This discussion of World War II and its place in art is free, open to the public, and scheduled for Saturday, January 22nd, at 1 pm at Community Players Theater, 201 Robinhood Lane, in Bloomington. CP notes that Parry's and McLaughlin's remarks will be followed by an informal reception with refreshments that also reflect the World War II era.
Posted by JulieK at 1:36 PM