The Opus Arte organization, which has brought opera and ballet performances to cinemas, has now added Shakespeare to its roster. "Love's Labour's Lost," the most recent entry in this "Shakespeare in Cinema" project, was filmed during a performance at the Globe Theatre in London, and from there made its way to the screen at the Art Theater in Champaign, where I was saw it last weekend. 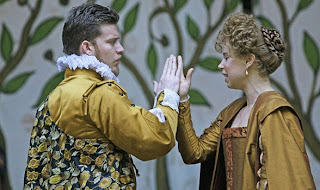 This particular filmed performance puts you right in the middle of the Globe. Although there are some close-ups and framed shots, a good deal of the time you can see the audience members and the whole stage, exactly as if you were there. Definitely a treat to get to visit the historic refurbished Globe without airfare or jetlag!

"Love's Labour's Lost" is probably not high on most people's lists of their favorite Shakespeare plays (except maybe Kenneth Branagh, who tried a musical version on film in 2000.) But "LLL" does have its joys. It's a fizzy romantic comedy for the most part, with the King of Navarre and his three compatriots Berowne, Longaville and Dumaine vowing to give up love for three years in order to concentrate on more studious pursuits. Of course, as soon as they take their oath, the lovely Princess of France and her three ladies in waiting pop up outside the castle, testing the limits of the men's forbearance. My favorite bits involve Berowne, that smart, witty lord who has always enjoyed the whip hand over Cupid, but now finds himself bemoaning his fate:

And I, forsooth, in love!
I, that have been love's whip,
A very beadle to a humorous sigh,
A critic, nay, a night-watch constable,
A domineering pedant o'er the boy,
Than whom no mortal so magnificent.
This wimpled, whining, purblind, wayward boy,
This signor-junior, giant-dwarf, Dan Cupid

Aside from the three lords and their ladies, the plot is further complicated by a clown named Costard, a Spanish dandy, a country wench named Jacquenetta beloved by both Costard and the Spaniard, a snippy little page, and a schoolteacher and a curate who like to spout Latin and make themselves sound intelligent.

In Shakespeare's time, the characters and their incessant wordplay (with puns and alliteration and rhymes and repartee spinning in every direction) probably seemed fresh and fun, although it may be a challenge to figure out what they're saying now. That's where the Globe production, directed for the stage by Dominic Dromgoole, excels, with zippy, funny staging tricks that communicate everything nicely. There's skipping, hopping, double-takes and pratfalls, and it all works. (You can see a trailer for the film, complete with amusing action, here. You can also see how Jonathan Fensom's clever scenic design puts the audience literally in the middle of the stage, with a sort of figure 8 representing the King's knot garden where groundlings lounge.)

Among the cast, I especially like Trystan Gravelle's Berowne (seen here talking about the play and performing a bit), who is sharp, headstrong and adorable throughout, as well as Michelle Terry's take on the Princess of France. She has enough spizzerinctum to dominate the action, which isn't really usual for Princesses of France in this play.

It's amazing to me that they all act, sing, dance and generally impress. British thespians seem to do that as a matter of course and I never have understood how that works. But it does. In this "LLL," there's singing after Shakespeare's bittersweet ending, tying it all up in a neat bow.

This was a terrific introduction to Opus Arte's "Shakespeare in Cinema," and I'm very much looking forward to "Romeo and Juliet," coming up next.
Posted by JulieK at 11:06 AM