Everything's Waiting for You, "Downton"

A lot of people are comparing the PBS "Masterpiece" series "Downton Abbey" (airing Sundays at 8 pm on my local PBS stations) with the "Upstairs, Downstairs" of yesteryear. I will now confess that I didn't watch "Upstairs, Downstairs," although I don't exactly know why. Probably because I was in high school when it aired and I had other, more teen-angsty things to do. Still, the setting of both shows is perfect for me, showing off beautiful British interiors and beautiful British people on both sides of the great social divide in the early part of the 20th century. 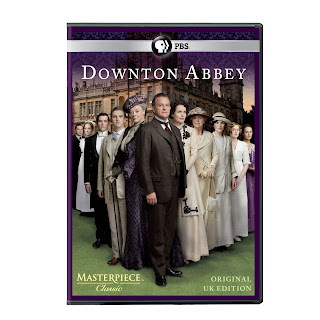 I love the fashion and look of the Edwardian era, and that's what you get at the beginning of "Upstairs, Downstairs" and in the first episode of "Downton Abbey," which aired last Sunday. (Small note: The Edwardian era is usually dated from 1901 to 1910, and "Downton Abbey" begins with the sinking of the Titanic in 1912, so it is technically not Edwardian. But the fabulous fashions are there, so... I'm calling it Edwardian.)

The multi-talented Julian Fellowes created the story for "Downton Abbey," dancing across the line between servants and masters in a dishy British estate at the beginning of King George V's reign, when everybody is clinging to old traditions and morés and rules about social position, even as everything changes around them. Fellowes showed he knows his way around the milieu in the movie "Gosford Park" as well as a novel called "Snobs," and he does just as well going back to the well one more time in "Downton Abbey."

As the story opens, Robert Crawley, the Earl of Grantham, has just found out that his presumptive heir has died on the Titanic. That leaves Lord Grantham and his household in a bit of a pickle, since the estate is securely entailed, meaning his daughters cannot inherit and a more distant male relative will need to be found who can take over after Lord Grantham. This puts everything up in the air for his family, since his daughters are going to need to be married off without the bait of the estate, his mother and his wife are pitching fits for different reasons, and the new (potential) heir, a lawyer who actually works for a living (Oh, the horror!), will be horning in.

There's plenty of intrigue and chicanery happening, what with a snobby Duke who was a marriage prospect for the Earl's oldest daughter who also had a thing with one of the servants (male) and is getting blackmailed; a new valet for Lord Grantham who has a bad leg and may get fired because of it; possible romance on both sides of the stairs; and a new guy in town who doesn't know which fork to use or how to instruct a servant and doesn't much care. It's all told with good energy, excellent speed and a whole lot of panache and style.

It helps that "Downton Abbey" is chock-full of wonderful British actors. On the aristocratic side, playing members of the Crawley family, we get Hugh Bonneville (someone you might recognize from the recent "Murder on the Orient Express" on PBS and the movies "Iris" and "Notting Hill"), the always-riveting Dame Maggie Smith, and a spirited Penelope Wilton (also in "Iris" as well as "Shaun of the Dead" and "The History Boys"). And among their servants, you might recognize Jim Carter (married to Imelda Staunton in real life -- he played the stage Nurse to her "real" Nurse in "Shakespeare in Love") as the family butler. There's even an American in the mix, with Elizabeth McGovern as the wealthy wife who saved the estate when she married the Earl of Grantham (played by Bonneville) and now finds that she has no control whatsoever over her money. McGovern and Bonneville have terrific chemistry; I found myself enjoying both their performances more than anything I've seen them do before.

I am eagerly anticipating the next installment tomorrow night, but if I really can't wait after that, PBS will let me buy the whole first season on DVD. Yes, I said "first season." Britian's ITV has announced that there will be a second season, showing us the further adventures of the Earl and his family at Downton Abbey. That is seriously good news!
Posted by JulieK at 12:44 PM