Cary Grant Acts the Perfect Angel in "The Bishop's Wife" 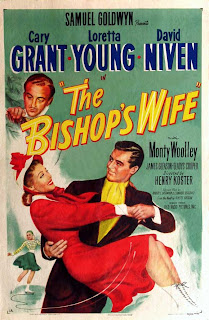 There are certain classic holiday movies that get wide exposure every year about this time -- "A Christmas Story," "White Christmas," "Miracle on 34th Street," "It's a Wonderful Life," various versions of "A Christmas Carol," "Holiday Inn," and maybe "Christmas in Connecticut" if we're lucky -- but two lovely choices -- "The Bishop's Wife" and "The Shop Around the Corner" -- don't show up as often. This year, the Normal Theater is doing its best to correct the oversight, screening both films in post-Thanksgiving slots.

That means you have the chance to see "The Bishop's Wife" tonight and Sunday night at 7 pm, as well as "The Shop Around the Corner" December 3rd and 4th.

But first... "The Bishop's Wife." I love Cary Grant in his 1940s movies. I love Cary Grant anytime, actually, and I am quite smitten by his performance in "Holiday" from 1938, but even so... He is truly irresistible in films like "My Favorite Wife" and "The Philadelphia Story," both released in 1940, through "The Talk of the Town" in 1942, "Notorious" in 1946, and yes, "The Bishop's Wife" in 1947. Beyond suave, impossibly charming, he is the perfect fantasy man in this period.

Still, as attractive as Grant certainly is in the "The Bishop's Wife," I wasn't a big fan of the movie when I was young and it was airing on "Dialing for Dollars" or other old movie outlets. For one thing, Grant plays an angel, not a real human being, so he doesn't get to bring out the big guns in terms of his dark, sexy appeal, which is disappointing when you're a pre-teen swooning over him. For another, the woman at the center of the bishop/wife/angel triangle is Loretta Young, who never impressed me much. She's the goodie-goodie type my mother (who introduced me to old movies) disliked intensely, right up there with June Allyson, Greer Garson and Doris Day, so I was probably biased right from the start. And I have to say, giving the movie another look, all the dewy close-ups and everybody saying what a wonder she is don't do her any favors. It's a saccharine overload, especially when Our Angel Cary (called Dudley by screenwriter Robert E. Sherwood) decides she is just so marvelous that he might be interested in giving up Angeldom for her. As if. I suppose director Henry Koster is responsible for all the Loretta love. Or maybe that was just the way producer Samuel Goldwyn wanted it.

Oh well. Those are quibbles. It really is a very sweet and pretty adorable movie, light enough to counteract the gooeyness quotient, with lots of nice supporting players who get the chance to shine as Dudley goes around town being fabulous and sparkly and inspiring. The main plotline involves the Bishop, a man named Henry Brougham, played by David Niven, and how he has become so absorbed with his campaign to raise funds for a humungous new cathedral that he is ignoring both his wife, the lovely Julia (yes, Loretta Young) and his faith. He prays for guidance, but what he gets is Dudley, who isn't really all that interested in Brougham's cathedral plans. Dudley is more of an old school angel, concerned about poverty and need more than big, fancy buildings. As he tries to show Brougham the light, he finds himself spending more time with Julia than her husband, helping her regain her joie de vivre with a new hat, a visit to a French restaurant, and some fancy ice skating.

He also gets a cynical cab driver (played by veteran character actor James Gleason) onto the ice, turns Henry's and Julia's daughter Debby (Karolyn Grimes) into a wiz in a snowball fight, gives a boost to a boys' choir, plays the harp so beautifully that Scrooge of a widow (the luminous Gladys Cooper) will change her ways, and offers a helping hand to a historian, nicely brought to life by Monty Woolley, who ends up with a priceless coin and a perpetually full wine bottle after Dudley visits. Somehow, it is entirely believable that Cary Grant could skate like a champ, coach snowball throwing, woo choirboys to practice, play the harp like an angel and fill bottles with one wag of his finger.

I know I heard somewhere that Grant could neither skate, speak French or play the harp before "The Bishop's Wife," but learned all three for the movie. That seems unlikely, but I guess the whole point of the film is to believe, so... I believe.

"The Bishop's Wife" was remade as "The Preacher's Wife" in 1996, with Denzel Washington as the angel and Whitney Houston as the unhappy wife. I think "Whitney Houston" is all you need to know about that one. Or maybe we were all just too cynical by 1996 to buy into an all-knowing, all-powerful angel trying to get a clergyman to give up the idea of wealth and status and instead help out the poor. I think today we're calling that socialist and class warfare.

But it works like a charm in 1947's version of "The Bishop's Wife." You can catch this sweet Christmas treat on the big screen at the Normal Theater tonight and tomorrow night at 7 pm.
Posted by JulieK at 3:19 PM