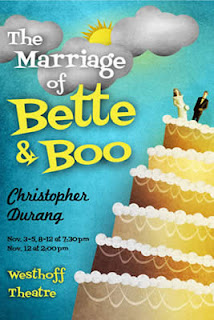 Christopher Durang has called "The Marriage of Bette and Boo" both his favorite and the most biographical of his plays. (Yes, he said "biographical," not "autobiographical." Since he is a very precise person, and "The Marriage of Bette and Boo" is also famous for the number of notes he put in the script to tell potential directors exactly how he wanted the show done, I believe he meant "biographical" when he said it. As in, this play is about his parents and grandparents and aunts more than about him, even though his stand-in, a character named Matt but nicknamed Skippy, is right there on stage.)

"The Marriage of Bette and Boo" features Durang's brand of dark, absurdist humor, but it also has a more complete plot and realistic subject matter than some of his other works. "Bette and Boo" follows (not in chronological order) the messy, sad, oddball lives of Durang's parents, the Bette and Boo in the title. (Durang is also specific that "Bette" should be pronounced like "Bet" or Bette Midler, not "Betty." His real mother's name was Patricia, not Bette or Betty or Elizabeth or anything like that. But the mother in the play is most definitely "Bette," pronounced "Bet." The father in the play is called Boo, or Bore, although Durang's real father was a Francis. Durang also changed his father's and grandfather's professions to something to do with insurance, rather than architecture.)

In 33 short scenes that take a little under two hours to perform, "The Marriage of Bette and Boo" traces the lives of these two unhappy souls from the time they get married through their son's birth and growing up years, Bette's insistence on continuing to try to have more children even though she is Rh negative and her babies kept dying at birth, Boo's alcoholism, the horror show that are this family's holidays, the controlling grandmother and silent grandfather on one side and the horribly mean, abusive grandfather and doormat grandmother on the other, and how the Catholic Church and one priest in particular figure into all the madness.

Under the direction of Christopher Dea for the Illinois State University School of Theatre, "The Marriage of Bette and Boo" comes off as painful, sad and warped as it needs to be. Michael Van Howe's scenic design is comfy and atmospheric, using family pictures on the wall, dumpy sofas and recliners and a few mismatched chairs to bring us home, with a few ovals on the wall that can change from windows to stained glass when we go to church. Tina Godziszewski's costumes fit the set, with lots of housedresses in turquoise, orange and brown, and a vast array of aprons.

Inside Westhoff Theatre, "Bette and Boo" puts audience members right in the action, as they are allowed to lump themselves into the velvet sofas and retro chairs and sit on the astroturf carpet next to Bette and Boo and their crazy relatives.

The ensemble keeps the pace going very well, enough that I sense that director Dea stressed speed with his actors, which is both bad and good. It's good, because the material needs speed and comic timing to keep its black humor going (like the dead babies who keep getting dropped on the floor). But it's bad when Bette (played with cheery insanity by Kayla Stroner) and Matt, our narrator, (played with a sort of deadpan repression by Christopher J. Bryant) whip through their speeches so quickly it's hard to decipher what they're saying.

Still, the timing overall is excellent, and the sight gags, like the priest impersonating frying bacon or the dead grandparents with dust covers thrown over their heads, still being wheeled around in their chairs, work very well. The dysfunction and sadness in the family is always there, even at the funniest moments, making "The Marriage of Bette and Boo" both more painful and more moving than I expected from Durang. So, yes, there's laughter, but for the most part, it's the uneasy laughter of recognition and identification.

"Happy families are all alike; every unhappy family is unhappy in its own way" is the famous first line of "Anna Karenina," but "Bette and Boo" shows you how alike unhappy families are, too. Drunk dad, sweet aunt who wallows in guilt, mom obsessed with babies as well as "Winnie the Pooh," all fueled by a strict Catholicism that doesn't allow for birth control or divorce... None of that fits my family, but the issues of trying to connect or feel supported in a weird, wacky world where the people you're related to are positively maddening? That fits every family, I think.

ISU's production of "Bette and Boo" traverses these tricky waters nicely, with excellent performances from the entire ensemble, but especially Ashlyn Hughes as the self-flagellating sister Joan, who never wavers in her commitment to Crazytown; Joey Fitzpatrick as the unhelpful priest and even more unhelpful doctor; and Jacqueline M. Dellamano and Tammy Wilson as the most distressing pair of grandmothers ever.

This "Bette and Boo" is very popular with the student body, it seems, as performances continue to sell out. If you can get in, I think this "Marriage" is worth your time.

THE MARRIAGE OF BETTE AND BOO
By Christopher Durang

Box office: 309-438-2535. Tickets can also be ordered online at www.ticketmaster.com. (Remember, several performances are sold out, so you'll need to be flexible if you really want to get in.)
Posted by JulieK at 12:39 PM