How Gwen de Veer Found Herself as a SIREN

As the last in my series of interviews on Deborah Zoe Laufer's SIRENS, a fantastical romantic comedy currently playing at Heartland Theatre Company, I talked to Gwen de Veer, who plays the title character, the Siren, in SIRENS. Gwen also plays a few other characters who appear in the life of Sam, a songwriter, and his wife Rose Adelle, who was once the inspiration for Sam's huge hit song. Now Sam looks elsewhere for inspiration. Like to a memory of a past love and a series of young, beautiful Sirens, all played by Gwen de Veer. 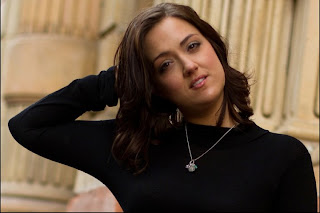 Hi, Gwen! Can you start us out by telling us a little about your academic background? You are a recent grad, right? How long have you been back in Bloomington-Normal?

I graduated last December and moved back home shortly after.

You studied voice as well as acting, right?

I got my B.F.A. in Acting from the University of Utah in Salt Lake City, and took voice lessons on the side (which has been handy for the Siren's song!)

Both your parents are performers and your mom, Connie de Veer, is also in SIRENS. Have you ever acted with either of them before?

I've never acted with either of my parents, and it's always been a dream of mine. I guess we've just never really found the right piece or venue.

Is it fun or daunting to play opposite her?

It's been really great acting with my mom, and even better sharing a dressing room with her! She's been my closest friend and supporter, and also a professional and artistic mentor. At first it was a little weird and I felt a little nervous and awkward, but having my mom in the rehearsal room has been one of the most comforting and inspiring experiences.

I understand you have acted with Todd Wineburner before. Where was that?

Todd and I were Annie and Daddy Warbucks at Miller Park in 1999. Phil Shaw directed.

This time out, instead of Daddy Warbucks, Todd is playing a middle-aged man stuck in a rut in both his career and his marriage, while you are the inspiration he looks to, the epitome of beauty and youth. What has been the biggest challenge in playing the role of a Siren?

That's a lot of pressure! There are also some potential pitfalls in playing characters that are, like it or not, objectified by Sam. All of these women in some way, use their youth and beauty to their advantage. I think it's hard for young women to be taken seriously because of this tendency, and as a young woman trying to be taken seriously, it's hard not to comment on it. As myself, I relate more to Rose than the Sirens in a lot of ways, but I had a lot of fun and learned a lot about myself in discovering the humanity and sense of fun and whimsy in all of these women.

I love it that you have made each one different and each one funny in her own way. Nice job with the versatility! Do you have a favorite role that you’ve played in the past?

I played Helen, the bossy coquette in THE CRIPPLE OF INISHMAAN by Martin McDonagh. I love the savage sense of irony that the Irish have, and that girl was just a terror*. I think I exorcized a lot of my mean girl demons in that role.

I know you did a 10-minute play at Heartland several years ago (as the daughter of a mother just getting out of prison) and last winter, you played Catherine, the daughter of a math genius, in David Auburn’s PROOF. That role has been played by powerhouse actresses like Mary Louise Parker and Gwyneth Paltrow. How did you make the role your own?

The great thing about working with a script as rich as PROOF is that there is so much there for each of the four actors to discover, and all of the really exciting moments catch you completely by surprise, that even from night to night, the play is different. Watching and acting in that show for me is like looking at a fractal. David Auburn did such a brilliant job of combining such contrasting characters with antagonistic objectives and such a vivid world within the play, that every moment you're hanging on the edge of your seat, and you're never done making new discoveries. I felt that when I saw it for the first time, and when I read it. Cyndee Brown did such a brilliant job of bringing together an ensemble of talented, astute and supportive actors and all five of us just dove on it like kids on a pile of Halloween candy. And I have to credit Michael Pullin for designing one of the most vivid and actable spaces I have ever played in. I really think that set was a huge part of the synergy of the production.

What roles stand out to you on your resume?

Well, when I was 8 years old I did a radio spot for the Illinois Shakespeare Festival entitled "What I Did on my Summer Vacation," and I really think of that as my magnum opus.

You recently directed HMS PINAFORE for Prairie Fire Theatre and played a character in the Discovery Walk at Evergreen Cemetery just before coming into SIRENS. Do you prefer acting or directing?

PINAFORE was my first time directing, and all I thought was I LOVE having the control! Also, it was nice to be able to drink after rehearsal during tech week, instead of going to bed early with the humidifier. But I can't get enough of either.

What’s next on your agenda?

You can catch me five days a week as the most persuasive server at Biaggi's!

*Helen keeps breaking eggs over her brother's head in that role in THE CRIPPLE OF INISHMAAN. Totally different from Gwen's adorable Sirens! 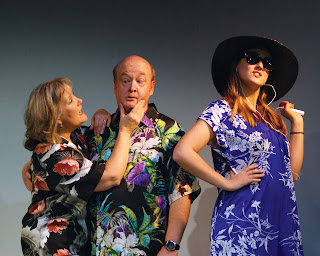 Songwriter Sam (Todd Wineburner, second from L) is married
to Rose (Connie de Veer, L) but tempted by a beautiful young
Siren (Gwen de Veer, R) in SIRENS at Heartland Theatre.
SIRENS continues at Heartland Theatre Thursdays through Sundays, with performances scheduled from November 10-20. To read more about the play, click here, or if you are ready to make reservations, you can click here. See you at SIRENS!
Posted by JulieK at 12:01 PM